With reference to the opening, Janis Cannon, senior vice president, upscale brands, Choice Hotels, stated, "With everything California has to offer — from beaches, a top-notch culinary scene and world-class entertainment to many Fortune 500 company headquarters — we're thrilled to bring our modern, upscale experience to another Golden State location."

The Cambria Hotels brand is a major growth driver for the company. During third-quarter 2021, the company’s upscale portfolio reported impressive unit growth of 22% year over year, primarily driven by Cambria and the Ascend Hotel Collection. During the quarter, the Cambria brand continued its positive momentum with unit growth of more than 9% year over year. The company stated that it has almost 60 Cambria hotels open across cities such as Chicago, Los Angeles, New York, New Orleans and Phoenix. The company anticipates ramped-up expansion across major U.S. cities. Further, it stated that it has 70 Cambria hotels in the pipeline. The company announced the addition of Cambria Hotel Austin Airport in Austin, TX in 2022. 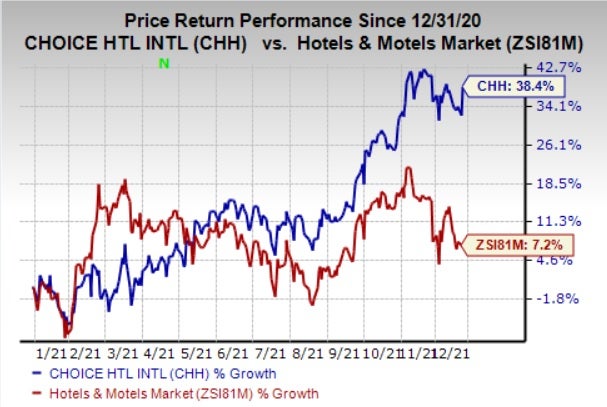 So far this year, shares of Choice Hotels have gained 38.4% compared with the industry’s 7.2% growth. The company is benefiting from continual expansion strategies through acquisitions and franchise agreements. Also, its focus on the loyalty program bodes well. Going forward, the company continues to focus on expansion strategies, enhancement of the mid-scale brand as well as transformation and advancement of the Comfort brands to drive growth in the upcoming periods. Earnings estimates for 2022 have moved up in the past 30 days, depicting analysts’ optimism regarding the stock’s growth potential.

Hilton Grand Vacations sports a Zacks Rank #1 (Strong Buy). The company has a trailing four-quarter earnings surprise of 411.1%, on average. Shares of the company have increased 54.1% so far this year.

The Zacks Consensus Estimate for Hilton Grand Vacations’ current financial-year sales and earnings per share (EPS) suggests growth of 189.5% and 158.1%, respectively, from the year-ago period’s levels.

Bluegreen Vacations flaunts a Zacks Rank #1. The company has a trailing four-quarter earnings surprise of 695%, on average. Shares of the company have surged 149.6% so far this year.

Camping World has a trailing four-quarter earnings surprise of 70.9%, on average. Shares of the company have appreciated 47.2% so far this year. The Zacks Consensus Estimate for CWH’s financial-year sales and EPS suggests growth of 25.9% and 80.1%, respectively, from the year-ago period’s levels.