In the past week, Delta Air Lines (DAL - Free Report) boosted its guidance for the fourth quarter of 2021, mainly owing to strong passenger demand during the holidays and waning omicron-related fears. Also, on the back of improved air-travel demand in the United States, Allegiant Travel Company (ALGT - Free Report) posted a substantial year-over-year increase in scheduled traffic for November 2021.Further, with COVID-19’s omicron variant ravaging Europe, particularly the UK and Ireland, Ryanair Holdings’ (RYAAY - Free Report) CEO Michael O'Leary expects the carrier’s capacity for the current and the next month to be dented.

An expansion-related update on the Northeast Alliance betweenAmerican Airlines (AAL - Free Report) and JetBlue Airways (JBLU - Free Report) was available in the past week. We note that the partnershipis under scrutiny over concerns related to reducing competition and jacking up air fares.

JetBlue also recently grabbed headlines following its decision to expand its codeshare partnership with the Irish carrier Aer Lingus. This story was covered in detail in the previous week’s roundup.

Recap of the Past Week’s Big Events

1 Per an SEC filing, Delta expects to generate an adjusted pre-tax profit of approximately $200 million in the December quarter. During the third-quarter 2021 earnings release in October, the airline had warned that rising fuel prices might put pressure on its ability to generate profits in the fourth quarter. DAL had then expected to incur a moderate loss in the December quarter.

Delta expects adjusted total revenues (excluding third-party refinery sales) to be 74% recovered in the fourth quarter compared with the same-period level in 2019. Previously, the airline had expected to generate total revenues in the low 70s (in percentage terms) compared with the 2019 level. The improved outlook is owing to better-than-anticipated total revenue per available seat mile and positive passenger revenue per available seat mile (compared with the 2019 reading) on account of strong travel demand during the holidays. Non-fuel unit costs are estimated to increase approximately 7% in the December quarter from the 2019 level. The same is compared with the previous guidance of an increase in the 6-8% range. Fuel price per gallon (adjusted) is predicted to be $2.05-$2.15 for the fourth quarter compared with the previously guided range of $2.25-$2.40. Total capacity is still expected to be 80% of the 2019 level. Delta currently carries a Zacks Rank #3 (Hold). You can see the complete list of today’s Zacks #1 Rank (Strong Buy) stocks here.

4. Per a Reuters report, Ryanair’s chief executive Michael O'Leary told the Guardian newspaper that the carrier will carry roughly 10% less passengers in December 2021 and January 2022. According to O’Leary, RYAAY intends to fly about 10 million people in the final month of 2021 (1 million less than the estimated figure). Moreover, RYAAY aims to trim its January schedule by nearly 10%. 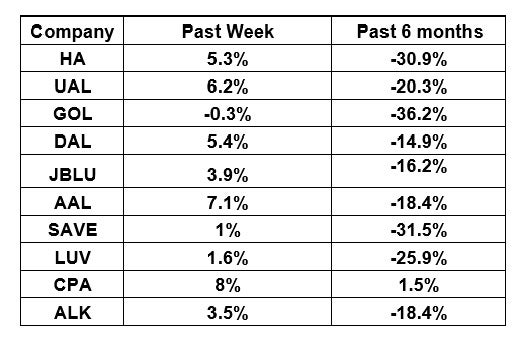 With air-travel demand improving, expansion-related updates by carriers may be available in the coming days.