Methanex Corporation (MEOH - Free Report) stock looks promising at the moment. It is benefiting from higher methanol prices and a restart of production in some of its plants that are expected to drive its results in the fourth quarter.

We are optimistic about the company’s prospects and believe that the time is right to add the stock to the portfolio as it looks poised to carry the momentum ahead.

Let’s delve deeper into the factors that make this chemical stock an attractive choice for investors right now.

Shares of Methanex have rallied 26.5% over the past six months against the 0.7% decline of its industry. It has also outperformed the S&P 500’s 9.5% rise over the same period. 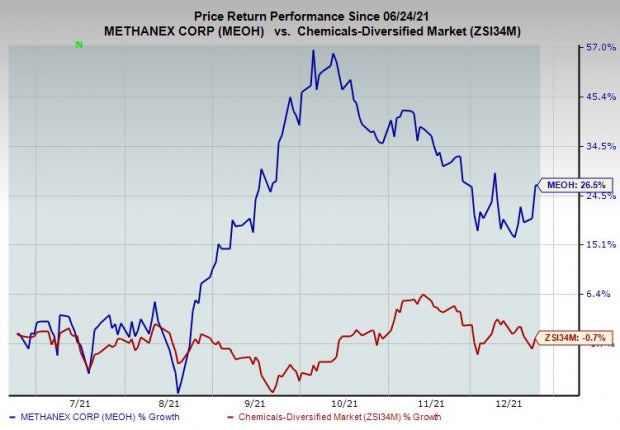 Over the past three months, the Zacks Consensus Estimate for Methanex for 2021 has increased 14.2%. The favorable estimate revisions instill investor confidence in the stock.

The Zacks Consensus Estimate for earnings for 2021 for Methanex is currently pegged at $5.95, indicating year-over-year growth of 467.3%.

Valuation looks attractive as the company’s shares are currently trading at a lower level than the industry average, suggesting that the stock still has upside potential.

Going by the EV/EBITDA (Enterprise Value/ Earnings before Interest, Tax, Depreciation and Amortization) multiple, which is often used to value chemical stocks, Methanex is currently trading at a trailing 12-month EV/EBITDA multiple of 5.5, cheaper compared with the industry average of 8.9.

Methanex is poised to benefit from higher methanol prices brought about by the methanol industry supply challenges. The company expects methanol prices to be significantly higher in fourth-quarter 2021. Higher prices are expected to drive its bottom line.

The company recently restarted the construction of its Geismar 3 project, which is expected to boost the company’s asset portfolio and future cash generation while delivering long-term value to shareholders. The company is optimistic that its strong liquidity position and cash flow generation will fund Geismar 3. The company restarted production in its Chile 4 plant in early October 2021 and forecasts a higher fourth-quarter production. The restart of its Motunui plant in New Zealand in late August, along with the benefits of the completion of the debottlenecking project, is expected to lead to considerably higher adjusted EBITDA sequentially in the fourth quarter of 2021.

MEOH also remains committed to boosting its balance sheet and maintaining liquidity. It ended the third quarter with a strong liquidity position of more than $900 million in cash and $900 million of undrawn backup liquidity.

Univar has an expected earnings growth rate of 55.2% for the current year. The Zacks Consensus Estimate for its current-year earnings has been revised 9% upward over the past 60 days.

Univar beat the Zacks Consensus Estimate for earnings in the four trailing quarters, with the  surprise being 24.1%, on average. UNVR’s shares have rallied 46.1% over a year.

Chemours beat the Zacks Consensus Estimate for earnings in each of the last four quarters. The company delivered a trailing four-quarter earnings surprise of roughly 34.2%, on average. CC has gained 19.5% over a year.

AdvanSix has an expected earnings growth rate of 197% for the current year. The Zacks Consensus Estimate for its current-year earnings has been revised 14.1% upward over the past 60 days.

AdvanSix beat the Zacks Consensus Estimate for earnings in the four trailing quarters, with the surprise being 47%, on average. ASIX’s shares have also surged 125.7% over a year.