Located in the Caernarvon Township, the $111-million property comprises a roughly 80,000 square foot gaming and entertainment facility, featuring 750 of the latest video reel slot and video poker machines and 30 table games (including blackjack, craps, roulette, baccarat). Apart from this, the casino will offer a Barstool Sportsbook comprising bar, bleacher seating, sports betting tellers, sports wagering, racing kiosks, interactive games, an outdoor firepit and a Barstool Sportsbook merchandise station. The company stated that the casino would be backed by ‘3Cs’ technology. Access to the myChoice loyalty program, mychoiceApp and mywallet will also be made available.

Penn National continues to evolve toward the new generation of cordless, cashless and contactless technology, collectively known as 3C’s, to drive growth. Amid the coronavirus crisis, such initiatives coupled with the company’s differentiated omnichannel strategy have paved the path for improved efficiency and customer service, thereby enhancing the top line.

In June 2021, the company successfully launched its 3C technology at Hollywood Casino at Penn National Race Course. This was followed by another implementation of 3C at the Meadows Casino (in mid-July) and Hollywood Casino York (in August). Given the solid results and its supporting role in the company’s omnichannel business approach, the company expects to roll out 3Cs technology across the Penn enterprise by the next 12 to 18 months, subject to some regulatory approvals. 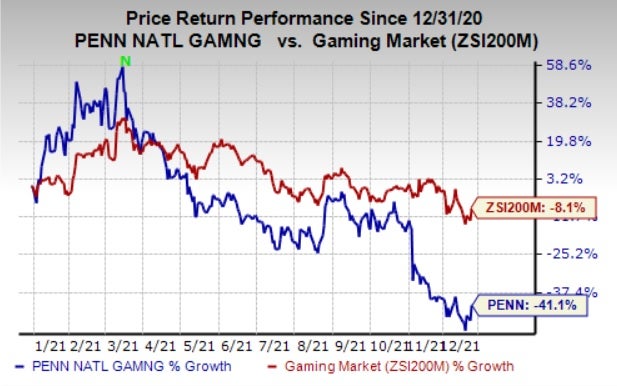 So far this year, shares of the company have declined 41.1% compared with the industry’s 8.1% fall.

Hilton Grand Vacations sports a Zacks Rank #1 (Strong Buy). The company has a trailing four-quarter earnings surprise of 411.1%, on average. Shares of the company have increased 58.7% so far this year.

The Zacks Consensus Estimate for Hilton Grand Vacations’ current financial-year sales and earnings per share (EPS) suggests growth of 189.5% and 158.1%, respectively, from the year-ago period’s levels.

Bluegreen Vacations flaunts a Zacks Rank #1. The company has a trailing four-quarter earnings surprise of 695%, on average. Shares of the company have surged 155.5% so far this year.

Camping World has a trailing four-quarter earnings surprise of 70.9%, on average. Shares of the company have appreciated 49% so far this year. The Zacks Consensus Estimate for CWH’s financial-year sales and EPS suggests growth of 25.9% and 80.1%, respectively, from the year-ago period’s levels.

4 Stocks to Ride the Favorable Athleisure Wear Trends for 2022