Over the past five trading days, major banks have been in focus on the hawkish Federal Reserve and solid economic expansion despite concerns related to the surge in COVID-19 cases from the Omicron variant. In company-specific developments, business restructuring/expansion initiatives continued, with Regions Financial (RF - Free Report) announcing yet another deal to bolster fee income sources.

Also, BNY Mellon (BK - Free Report) continued to strengthen its collaboration with SNB Capital by expanding operations in Saudi Arabia to help build a robust, market-leading and inclusive capital market ecosystem. On the other hand, Citigroup (C - Free Report) made advances with its plan to exit consumer banking operations in selected markets by announcing the sale of its operations in the Philippines.

Further, legal matters cropped up for JPMorgan (JPM - Free Report) and Capital One (COF - Free Report) . JPM agreed to pay $200 million to the regulators for failures in record keeping, while COF will pay $190 million to settle a class-action lawsuit.

Re-cap of the Week’s Important Developments

1. At the heels of the recently closed buyout of Sabal Capital, Regions Financial has inked a deal to acquire a preeminent merger and acquisition (M&A) firm, Clearsight Advisors, Inc. The acquisition marks an additional avenue for the bank to broaden its specialty capabilities as well as M&A advisory services for existing technology sector clients. The company intends to consolidate Clearsight into Regions Bank’s expanding Capital Markets division.

2. As part of its plan to exit consumer banking operations in selected markets, Citigroup has signed an agreement with UnionBank of the Philippines to dispose of its consumer banking franchise in the Asian country. UnionBank will pay cash consideration for the net assets of the acquired businesses along with a premium of PHP45.3 billion (around $908 million). The deal will enable Citigroup to free up roughly $300 million of allocated tangible common equity.

4. JPMorgan will be paying $200 million as a fine to the U.S. regulators – the Securities and Exchange Commission and the Commodity Futures Trading Commission. The company has been accused of “widespread and longstanding failures” to preserve employee communications on personal mobile devices, messaging apps and e-mails.

Per the regulators, JPMorgan allowed its staff to use WhatsApp and other communication platforms on their personal devices, and failed to preserve the offline communications in a violation of the federal securities law.

5. Capital One has agreed to pay $190 million to settle a class-action lawsuit filed by its customers following the massive data breach incident. While noting that it has fully reserved the amount, the company stated the settlement will cover 98 million Americans.

Capital One, in an emailed statement, said, “We are pleased to have reached an agreement that will resolve the consumer class litigation in the U.S.”

In July 2019, Capital One had announced that data related to more than 100 million customers’ accounts and credit card applications were illegally accessed by a hacker in March that year. Subsequently, federal prosecutors had arrested Paige A. Thompson, a former Amazon cloud employee, for breaching the COF’s server. 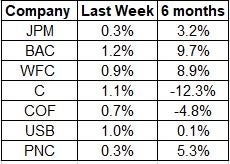 Over the past five trading sessions, shares of Bank of America gained 1.2%, while that of Citigroup rallied 1.1%.

What’s Next in the Banking Space?

Over the next four trading days, the major bank stocks are likely to perform in a similar fashion, unless there is any major change in the economic front and/or changes in number of COVID-19 cases.