Valued at $324.1 million, the contract is projected to get completed by January 2027. Per the terms, Lockheed will procure material modification kits for F-35 jets along with offering program management, non-recurring engineering, aircraft induction, contractor field, depot site and laser shock peening site support.

The contract will serve the U.S. Air Force, Navy, Marine Corps, non-U.S. Department of Defense (DOD) participants as well as Foreign Military Sales (FMS) customers from the governments of Israel, Japan and the Republic of Korea.

The majority of the work related to this deal will be executed in Fort Worth, TX.

As a result, Lockheed enjoys a consistent inflow of contracts for the production, delivery of associated spare parts as well as other deals concerning the F-35 jet program. For instance, in September 2021, the company clinched annualized contracts worth $6.6 billion for fiscal years 2021-2023, involving the sustainment of its global F-35 fleet, from the F-35 Joint Program Office. The contract also requires the company to build enterprise capacity for supporting the future fleet of more than 3,000 F-35 jets.

Such contract wins, including the latest one, are expected to boost Lockheed Martin's top-line performance in the days ahead.

Boeing incurred an adjusted loss of 60 cents per share in third-quarter 2021, which came in much wider than the Zacks Consensus Estimate of a loss of 17 cents. BA stock has risen 33.5% in the past five years.

Textron reported third-quarter 2021 adjusted earnings of 85 cents per share, which exceeded the Zacks Consensus Estimate of 75 cents by 13.3%. TXT stock has gained 52.3% in the past five years.

Shares of Lockheed Martin have lost 1.4% in the past year compared with the industry's decline of 32%. 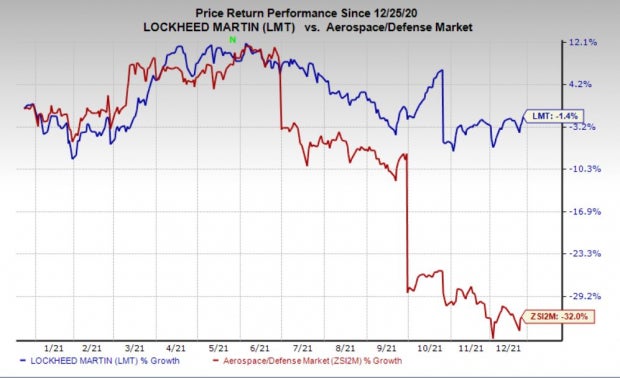