Shares of Caesars Entertainment, Inc. (CZR - Free Report) have gained 27.6% year to date, compared with the industry’s rally of 8.7%. Robust occupancy and solid regional performance have been aiding the company. The company has also been benefiting from partnerships. However, concerns regarding the Omicron variant might hurt the company in the near future.

The company continues to gain from robust occupancy. During third-quarter 2021, occupancy in Las Vegas reached 89%, with weekend occupancy attaining 86%. The upside was primarily driven by pent-up demand and solid booking trends. Going forward, the company remains optimistic with respect to booking trends as it is witnessing increased bookings for group and convention room nights. The company expects uptrend in bookings to continue in 2022 and beyond. Caesars Entertainment revealed that while attrition remains higher than normal, it began witnessing the return of conventions to Las Vegas in the third quarter. The segment accounted for roughly 10% of occupied room nights. The trend is likely to continue in 2022. The company expects the return of the group and convention business and entertainment offerings to drive incremental demand in the Las Vegas market.

The company continues to witness encouraging trends for its regional destination properties. In the third quarter, the company reported encouraging revenues, adjusted EBITDA and margin performance. During the quarter, net revenues in the segment were $1,492 million compared with $1,055 million in the year-ago quarter. The segment’s adjusted EBITDA was $554 million compared with $350 million reported in the prior-year quarter. Adjusted EBITDA (excluding Lake Charles) margin was 38%, expanding 860 basis points (bps) from 2019 levels. The upside was primarily driven by reductions in workforce and marketing costs, synergies from the purchasing power of the combined Caesars organization, and limitations on certain lower margin food as well as beverage offerings.

Caesars Entertainment continues to focus on partnerships to drive growth. The company has expanded its partnership with the Arizona Diamondbacks and Caesars Superdome. William Hill, which is part of Caesars Entertainment, opened its first sportsbook inside U.S. sports complex at the world-famous Capital One Arena in 2020. Meanwhile, the company is committed toward expanding relationships with leagues and professional sports teams. To this end, it has forged partnerships with the NBA, NHL and MLB. It is also the official casino sponsor and sports betting partner of the NFL. On Aug 12, 2021, the company announced a collaboration with an American football team — Houston Texans — making it its official casino partner. 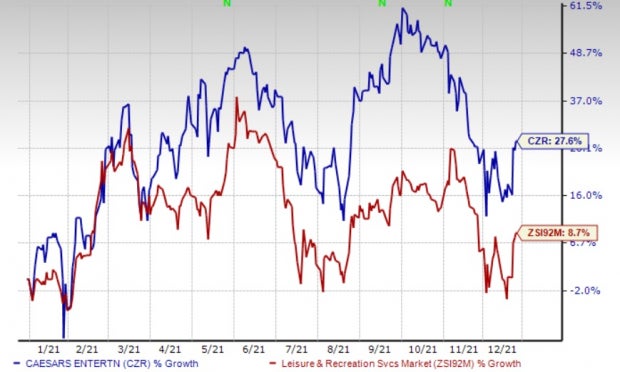 The coronavirus pandemic negatively impacted the company’s business, financial condition and results of operations in the three months ended Sep 30, 2021. The impact of COVID-19 on its business remains uncertain.

Caesars Entertainment is subject to extensive regulation under laws, rules and supervisory procedures primarily in the jurisdictions where its facilities are located. If additional gaming regulations are adopted in its operating jurisdictions, such as imposition of restrictions or costs, it might adversely affect the company.

Churchill Downs sports a Zacks Rank #1. The company has a trailing four-quarter earnings surprise of 13.7%, on average. Shares of the company have gained 21.4% so far this year.

The Zacks Consensus Estimate for Churchill Downs’ current financial-year sales and earnings per share (EPS) suggests growth of 51.4% and 684.3%, respectively, from the year-ago period’s levels.

Bluegreen Vacations flaunts a Zacks Rank #1. The company has a trailing four-quarter earnings surprise of 695%, on average. Shares of the company have soared 159.7% so far this year.

Century Casinos carries a Zacks Rank #2 (Buy). The company has a trailing four-quarter earnings surprise of 758.9%, on average. Shares of the company have increased 99.4% so far this year.

The Zacks Consensus Estimate for Century Casinos’ current financial-year sales and EPS suggests growth of 26.9% and 146.6%, respectively, from the year-ago period’s levels.