Penn National Gaming, Inc. (PENN - Free Report) is poised to benefit from Barstool Sports expansion, strategic partnerships and 3C’s initiatives. However, a decline in traffic from pre-pandemic levels and stiff competition from peers is a concern.

Let us discuss the factors that highlight why investors should hold on to the stock for the time being.

Most gaming companies are banking on sports betting following its legalization outside Nevada. Penn National announced historic strategic partnerships with DraftKings, PointsBet, theScore and The Stars Group. The company is focused on collaborating with various gaming companies to leverage its unique brands, cater to large audiences and fulfill commitments to serve sports fans. The company is optimistic regarding the immense brand value of Barstool and theScore. The acquisition of theScore, which is the strongest sports brand in Canada, will automatically drive Penn National’s brand expansion in the country. Along with the amplification of the company’s brand value, the buyout will help cross-promote and cross-market between two large brands.

Penn National continues to evolve toward the new generation of cordless, cashless and contactless technology, collectively known as 3C’s, to drive growth. Amid the coronavirus crisis, such initiatives coupled with the company’s differentiated omnichannel strategy have paved the path for improved efficiency and customer service, enhancing the top line.

In June 2021, the company successfully launched its 3C technology at Hollywood Casino at Penn National Race Course. This was followed by another implementation of 3C at the Meadows Casino (in mid-July), Hollywood Casino York (in August) and Hollywood Casino Morgantown (December). Given the solid results and its supporting role in the company’s omnichannel business approach, the company expects to roll out 3Cs technology across the Penn enterprise by the next 12 to 18 months, subject to some regulatory approvals. 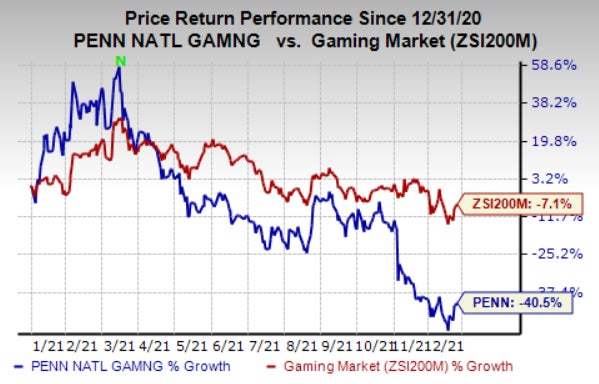 Shares of Penn National have declined 40.5% so far this year compared with the industry’s 7.1% fall. The dismal performance was caused by the coronavirus crisis. During third-quarter 2021, the company’s operations were affected by regional outbreaks of the Delta variant. Although the company resumed operations in all of its properties, traffic is still below pre-pandemic levels. Given the uncertainty revolving around the crisis, chances of operational restrictions (imposed by governmental authorities), reimposing stay at home orders and travel restrictions cannot be ruled out.

The company is continuously facing intense competition from various casinos, video lottery, gaming at taverns and other Internet wagering services.

Churchill Downs sports a Zacks Rank #1. The company has a trailing four-quarter earnings surprise of 13.7%, on average. Shares of the company have increased 21.4% so far this year.

The Zacks Consensus Estimate for Churchill Downs’ current financial-year sales and earnings per share (EPS) suggests growth of 51.4% and 684.3%, respectively, from the year-ago period’s levels.

Bluegreen Vacations flaunts a Zacks Rank #1. The company has a trailing four-quarter earnings surprise of 695%, on average. Shares of the company have surged 159.7% so far this year.

Century Casinos carries a Zacks Rank #2 (Buy). The company has a trailing four-quarter earnings surprise of 758.9%, on average. Shares of the company have increased 99.4% so far this year.

The Zacks Consensus Estimate for Century Casinos’ current financial-year sales and EPS suggests growth of 26.9% and 146.6%, respectively, from the year-ago period’s levels.