Last week, the European Automobile Manufacturers Association released data for commercial vehicle registrations made in November 2021. New registrations declined 14.7% year over year for the fifth straight month amid persistent chip crunch, which impacted sales volumes across all major markets. Registrations in Spain, Italy, France, and Germany fell 30.4%, 15%, 12.2%, and 22.1%, respectively. Meanwhile, for the first nine months of 2021, registrations for commercial vehicles in the European Union region remained in the positive territory. Sales were up 11.5% year over year for the said time frame. Registrations in key countries including Italy, Spain, Germany, and France were up 17.6%, 0.6%, 1.3%, and 9.4% year over year, respectively.

CarMax reported third-quarter fiscal 2022 (ended Nov 30, 2021) net earnings per share of $1.53, beating the Zacks Consensus Estimate of $1.48. The bottom line also increased from $1.42 per share recorded in the year-ago period. The auto retailer registered revenues of $8,527.8 million for the November-end quarter, beating the Zacks Consensus Estimate of $7,891 million. Also, the top line recorded a 64.5% year-over-year increase.

CarMax’s used-vehicle net sales summed $6,435.6 million for the reported quarter, up 53% year over year owing to an increase in average retail selling prices and higher unit sales. Wholesale vehicle revenues skyrocketed 132.1% from the year-ago level to $1,922.3 million. Other sales and revenues rose 15.7% year over year to $169.9 million for the fiscal third quarter. KMX had cash/cash equivalents and long-term debt of $62.6 million and $2,602.6 million, respectively, as of Nov 30, 2021.

Ford issued a recall for 184,698 model year 2021-2022 F-150 pickups over a potential defect that could cause the driveshaft to fracture. Per the U.S.-based auto biggie, the recalled trucks have underbody heat and noise insulators that may loosen and touch the aluminum driveshaft, which could damage the driveshaft and cause it to rupture ultimately. A damaged driveshaft could potentially cause a loss of drive power or loss of vehicle control when contacted with the ground.

So far, Ford has recognized 27 broken driveshafts on 2021-2022 F-150s suffering from this problem. The affected F-150s include Crew Cab four-wheel-drive models with the 145-inch wheelbase and only those integrated with the 302A and above equipment group. Lesser-equipped F-150s are not equipped with damaged insulators. Dealers will inspect and repair the driveshaft to resolve the problem, as necessary. They will also properly attach the underbody insulators. Both the repairs will be done free of cost and owners will be notified starting Jan 31, 2022, via mail.

Toyota announced the decision to halt operations on seven production lines at five factories in Japan next month because of supply-chain bottlenecks, semiconductor chip shortages and the COVID-19 pandemic. The production line for sport utility vehicles such as RAV4 and Harrier at Toyota's Takaoka plant will be paused for seven days, including two days suspension due to the holiday season. Two lines at Toyota Auto Body's Yoshiwara Factory, one line each at the Inabe and Fujimatsu plants, and two lines at Toyota Industries' Nagakusa plant will also halt two days of holiday production.

Toyota stated that the latest suspension at the domestic factories would slash output by about 20,000 vehicles amid procurement delays for semiconductors and other parts. Nonetheless, the automaker continues to stick to its global production target of 9 million vehicles for the fiscal year ending March 2022. Further, TM’s January 2022 production plan to build 800,000 vehicles globally, announced in mid-December, will also be implemented.

Thor has partnered with ZF Friedrichshafen AG to jointly develop a high-voltage electric drive system for towable RVs. The e-trailer system is likely to extend the range of an EV when towing a trailer. The collaboration has led to a concept travel trailer integrated with a prototype eTrailer System. The concept vehicle will be on display at the Tampa RV Supershow, which will be held next month.

In a separate development, Thor authorized a stock buyback program of $250 million, encouraged by strong first-quarter fiscal 2022 results. The repurchase authorization is set to expire on Dec 21, 2024. Thor has raised regular dividend for 10 straight years, backed by robust cash flow generation and a solid liquidity profile. It returned $91 million to shareholders via dividends in fiscal 2021. The latest share repurchase program is a step forward in THO’s commitment to enhance shareholders’ value.

General Motors announced that the Chevrolet Bolt EV and EUV’s production halt at the GM Lake Orion Assembly Plant in Michigan has been extended through February 2022. Production activities in the plant have been suspended since the end of August 2021, when a recall for the Chevy Bolts was issued, following several battery fires involving these vehicles.

The latest decision to lengthen the production halt till February-end was taken as General Motors remains committed to prioritizing the output of new battery modules for repairing the recalled Chevrolet Bolt EV and EUV instead of building new vehicles for the models. Meanwhile, battery-pack production of Bolt EV and EUV restarted in mid-September when GM and battery pack supplier LG Chem worked around the clock to track down and fix the manufacturing defects in the battery cells of the vehicles. 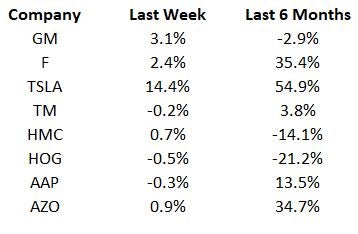 Industry watchers will be keeping a close watch on December 2021 U.S. car sales, likely to come out later this week. Also, stay tuned for updates on how automakers will tackle the semiconductor shortage and make changes in business operations.