OPKO Health, Inc. (OPK - Free Report) recently announced preliminary top-line results from its Phase 2 trial with RAYALDEE for the treatment of mild-to-moderate COVID-19. The trial — titled A Randomized, Double-Blind Placebo-Controlled Study to Evaluate the Safety and Efficacy of RAYALDEE (calcifediol) Extended-release Capsules to Treat Symptomatic Patients Infected with SARS-CoV-2 (REsCue) — enrolled 171 symptomatic COVID-19 outpatients from various U.S. sites who were placed under four weeks of treatment with RAYALDEE or placebo and a two-week follow-up.

The trial is based on growing medical indications that vitamin D repletion therapy can lessen the severity of upper respiratory tract infections, thereby accelerating recovery from COVID-19.

The latest positive trial result is expected to significantly strengthen OPKO’s position through the global sales of RAYALDEE, a component of the company’s broader Pharmaceuticals business.

Significance of the Result

In the trial, the enrolled patients were administered RAYALDEE in order to gradually raise their serum total 25-hydroxyvitamin D (25D). The COVID-19 symptoms were self-reported daily during the 42-day study using the FLU-PRO Plus questionnaire, an outcome tool validated for upper respiratory tract infections.

The trial results met both the desired efficacy endpoints — reaching the targeted serum 25D level and the benefit of raising serum 25D on the time to resolution of five COVID-19 symptoms. Safety endpoints, which included vital signs and physical examinations, among others, showed no significant change with treatment.

Per a report by MarketsandMarkets, the global vitamin D therapy market is anticipated to reach $3.3 billion by 2024 from $1.9 billion in 2019, at a CAGR of 11.6%. Factors like rising awareness of vitamin D deficiency and growing incidences of osteoporosis in women are expected to drive the market.

This month, OPKO received the FDA’s approval for its 4Kscore Test. The test is approved for use in men aged 45 and above who have not had a prior prostate biopsy or are biopsy negative, and have an age-specific abnormal total PSA and/or abnormal digital rectal exam.

In October, the company reported its third-quarter 2021 financial results where it recorded robust revenues in its Pharmaceuticals arm on the back of accelerating growth within OPKO’s international pharmaceutical businesses. The company also witnessed strong sales of RAYALDEE during the quarter. 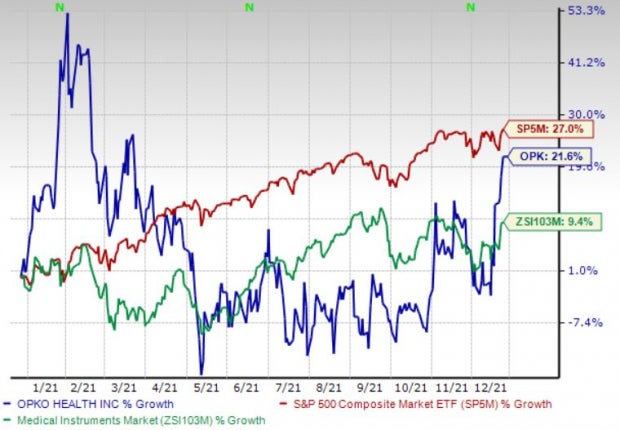 LabCorp, flaunting a Zacks Rank #1 (Strong Buy), has an estimated long-term growth rate of 10.6%. LH’s earnings surpassed estimates in the trailing four quarters, the average surprise being 25.73%. You can see the complete list of today’s Zacks #1 Rank stocks here.

LabCorp has gained 49.1% compared with the industry’s 15.5% rise over the past year.

Thermo Fisher has an estimated long-term growth rate of 14%. TMO’s earnings surpassed estimates in the trailing four quarters, the average surprise being 9.02%. It currently carries a Zacks Rank #2 (Buy).

Thermo Fisher has gained 41.2% compared with the industry’s 9.4% rise over the past year.

AMN Healthcare has an estimated long-term growth rate of 16.2%. AMN’s earnings surpassed estimates in the trailing four quarters, the average surprise being 19.51%. It currently sports a Zacks Rank #1.

AMN Healthcare has gained 76.6% against the industry’s 58.6% fall over the past year.