Shares of BNPQY (which is one of Europe’s main custodian servicers) gained 1.2% following the news release. The French lender has been working for several months on the offer.

BBVA announced the sale of its custody unit this summer, while the final auction is expected early next year. Currently, the Spanish lender has been working on shortlisting bidders that can be admitted to the final stage.

Per sources, who asked not to be identified, the sale is valued at 500 million euros ($566.5 million). A couple of other firms have also been showing keen interest in buying BBVA’s custody business.

None of State Street, BNP Paribas or Banco Bilbao has made any comment on the matter yet.

Through their custody units, banks manage clients’ assets in return for a fee. However, since custodian servicing is a low-margin business, rapidly increasing competition has made scale important, which is, in turn, pressurizing banks to sell such operations.

Per Reuters, one of the sources stated, “You need to generate heavy volumes for these operations to make sense as margins are low.”

Over the past year, shares of State Street have gained 30.4%. BBVA and BNPQY stocks have gained 19% and 29.8%, respectively. 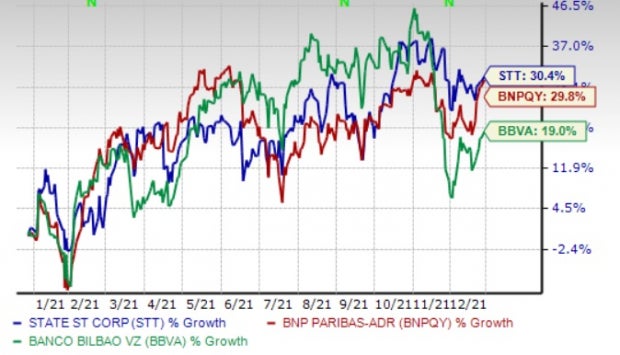 4 REITs to Snap Up As U.S. Holiday Sales Surge