Telefonica, S.A. (TEF - Free Report) recently secured 5G telecommunications equipment from Ericsson (ERIC - Free Report) to replace the existing gear of China-based Huawei used for 5G rollout across Spain. The strategic move is likely to have been influenced by alleged data intrusion efforts by Huawei that have led to various restrictions by U.S.-led allied governments.

The United States has long suspected Huawei to be an extension of China’s government due to the close ties of its founder with the military. Moreover, the fact that Huawei products are remarkably cheap owing to the huge subsidies by the government to undercut other 5G equipment manufacturers has perennially evoked a feeling of mistrust. Consequently, Huawei was placed in the U.S. ‘Entity List’ —  a list of entities that are ineligible to receive raw materials or technology without government approval.

The superfast 5G networks are widely expected to facilitate the transfer of a larger pool of data, making them more vulnerable and prone to cyber theft. Critics contend that countries could go to any extent to gain a greater pie in this trillion-dollar market and have a political, economic and technological advantage. As such, most countries are devising ways to better encrypt communications to thwart snooping attempts and secure the telecommunications network to eliminate risks.

The United States has extensively used its diplomatic channels in the past to urge its allies to shun Huawei from their 5G wireless networks, citing security threats and espionage by China’s government. Telefonica is the latest carrier that has decided to forego Huawei equipment utilized for 5G deployments throughout Spain. Although it has refused to divulge the details, media reports have revealed that a large volume of Ericsson equipment was purchased to replace the gear.

Owing to the wide proliferation of the smartphone market and subsequent usage of mobile broadband, user demand for coverage speed and quality has increased. Further, to maintain a superior performance with traffic increases, there is a continuous need for network tuning and optimization. Ericsson, being one of the premier telecom service providers, is much in demand among operators to expand network coverage and upgrade networks for higher speed and capacity. This Sweden-based telecommunications equipment provider is arguably the world’s largest supplier of LTE technology with a significant market share and has established a large number of LTE networks worldwide.

Telefonica has adopted a multi-vendor strategy by collaborating with Nokia Corporation (NOK - Free Report) and Ericsson to establish its 5G infrastructure in Spain. The company’s 5G network provides almost 80% of the population with advanced mobile Internet services, streamlining the entire communications infrastructure of the country. In recent years, Telefonica has invested heavily in the deployment and transformation of its network to provide excellent connectivity in all of its dimensions, capacity, speed, coverage, and security.

Nokia has been Telefonica’s preferred vendor since 2018 and has supported its 5G strategy with trials in the historical city of Segovia in central Spain. The telecommunications equipment provider undertook several initiatives to ascertain the capabilities of the carrier and enable local citizens and businesses to realize the potential benefits of high-speed 5G data services.

Telefonica has restructured its Latin American business while remaining focused on other key European markets and the United States. With a major upheaval in eight Latin American markets, the company aims to “reinvent” itself amid a challenging macroeconomic environment.

Shares of the company have gained 7.7% in the past year compared with the industry’s rise of 6.2%. We remain impressed with the inherent growth potential of this Zacks Rank #3 (Hold) stock. 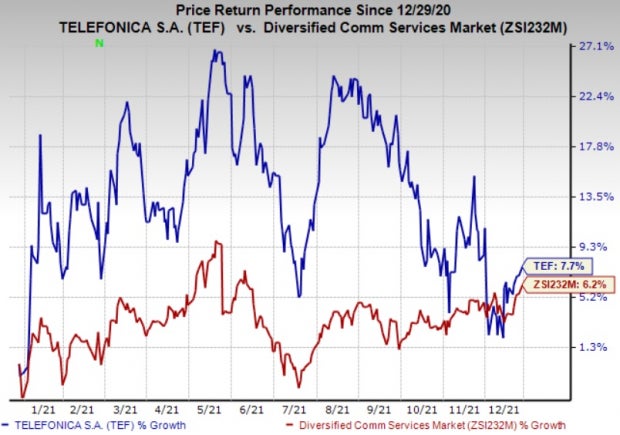 Clearfield delivered an earnings surprise of 50.8%, on average, in the trailing four quarters. Earnings estimates for the current year for the stock have moved up 68.2% since January 2021. Over the past year, Clearfield has gained a solid 244%.