Orange S.A.’s (ORAN - Free Report) subsidiary, Orange Belgium, recently announced its intent to acquire about 75% minus one share in VOO SA in association with Nethys. The buyout marks a step toward reinforcing Orange Belgium’s national convergent strategy, enabling the company to deploy a high-speed network infrastructure in Wallonia and Brussels.

VOO is a Belgium-based communications services provider. The entity provides customers with avant-garde services backed by its diverse portfolio of broadband Internet, fixed and mobile telephony and television offerings. It owns the cable network in the Walloon region and part of the Brussels region.

Following a series of exclusive negotiations along with the approval of the board of directors of Enodia, Orange Belgium and Nethys, it is expected that the buyout will strengthen the quality of VOO's network in the long run, increasing investment and competition in the telecommunications sector. This will enable customers based in Wallonia and the Brussels region to access superior network services.

The deal is based on an enterprise value of €1.8 billion for 100% of the capital. Post the integration, the agreement will generate considerable synergies related to the handover of VOO's MVNO (Mobile Virtual Network Operator) business to Orange Belgium's network. With a lower leverage ratio, Orange Belgium will finance the deal via an intra-Group loan.

The low-debt leverage will secure Orange Belgium’s position without any financial risks in the future. The combined synergies will make the EBITDA multiple 6.5x. As part of the transaction, Nethys will retain certain governance rights with a minority stake in VOO. In fact, it has also been given the option to convert its stake in VOO into Orange Belgium shares.

This will help in strengthening the long-standing relationship of VOO and Orange Belgium in the long run. Further, Orange intends to fortify BeTV, a Belgium-based cable television platform, and is committed to enhancing VOO's call center, thereby boosting its investment plan.

Apart from combining the expertise of Orange Belgium and VOO, the plan involves cable modernization and accretive fibre optic rollouts with multi-gigabit connectivity. Driven by their high-complementary assets, the acquisition will revamp the network infrastructure in Belgium and fortify Orange Belgium’s leadership in convergence in Europe. The transaction is subject to certain customary conditions and is expected to close in 2022, post the approval of the European Commission.

A few months ago, Orange completed the acquisition of a majority stake in Telekom Romania Communications (TKR) for a total purchase price of €268 million on a debt-free, cash-free basis. The transaction for a 54% controlling stake in one of Romania’s leading fixed telecom operators is targeted to realize convergence goals in Europe, as Orange intends to ramp up operations in the continent.

The acquisition helped Orange to tide over competition and establish itself as the de-facto leader in the country with an integrated portfolio of fixed and wireless services. With complimentary product offerings, the buyout offered broader benefits and wider choices to customers in Romania. It is yet to be seen how Orange sustains this growth momentum and whether the proliferating subscriber base can actually help it generate profitable revenues in the days to come.

Orange currently has a Zacks Rank #3 (Hold). The stock has declined 11.3% compared with a 6.6% fall of the industry in the past year. You can see the complete list of today’s Zacks #1 Rank (Strong Buy) stocks here. 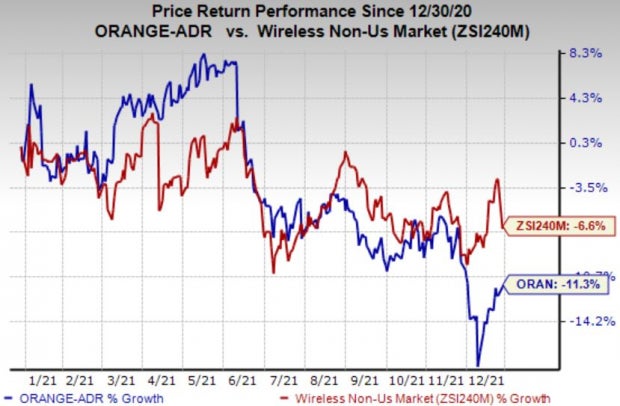 Harmonic, Inc. (HLIT - Free Report) is a better-ranked stock in the broader industry, sporting a Zacks Rank #1. The consensus estimate for current-year earnings has been revised 23.1% upward in the past 60 days.

Harmonic delivered a trailing four-quarter earnings surprise of 61.1%, on average. The stock has appreciated 63.1% in the past year. HLIT has a long-term earnings growth expectation of 15%.

Clearfield, Inc. (CLFD - Free Report) also flaunts a Zacks Rank #1. The Zacks Consensus Estimate for its current-year earnings has been revised 8.8% upward in the past 60 days.

Clearfield delivered a trailing four-quarter earnings surprise of 50.8%, on average. CLFD has surged 236.1% in the past year.

Qualcomm Incorporated (QCOM - Free Report) is another solid pick for investors, carrying a Zacks Rank #2 (Buy). The consensus estimate for current-year earnings has been revised 14% upward in the past 60 days.

Qualcomm delivered a trailing four-quarter earnings surprise of 11.2%, on average. It has gained 23.3% in the past year. QCOM has a long-term earnings growth expectation of 15.3%.