Here's Why GoPro (GPRO) is an Appealing Bet for Investors

Shares of GoPro, Inc. (GPRO - Free Report) have rallied 29.1% compared with the industry’s growth of 20.4% in the past year. The uptick was driven by higher subscription revenues, backed by an effective operating business model. The company is committed to producing the world’s most versatile cameras and imaging software solutions. It has a trailing four-quarter earnings surprise of 90%, on average.

The stock currently has a VGM Score of A. Earnings estimates for the current and next fiscal have increased 13.3% and 10.2%, respectively, in the past two months. With impressive growth potential and robust fundamentals, this Zacks Rank #2 (Buy) action camera maker is an enticing investment option at the moment. 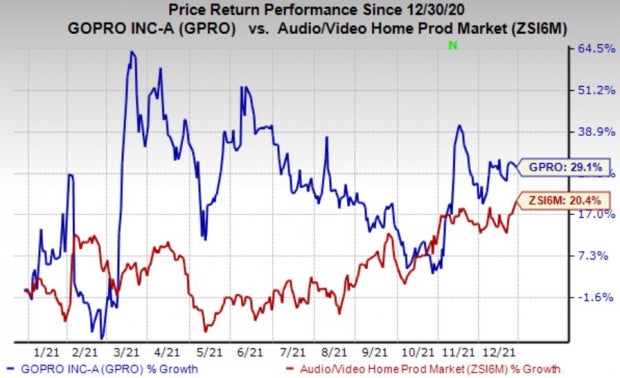 Headquartered in San Mateo, CA, GoPro is one of the leading manufacturers of the world's most handy camera and contributor to some of the most immersive and engaging content. It manufactures mountable and wearable capture devices such as action cameras and related accessories. Its core product is the HERO line of capture devices, which was initially launched in 2009.

The company follows both Gopro.com and the Retail channel for selling its products. It generates a majority of its revenues from the retail channel to augment the reach of its offerings throughout national and international markets as well as in several specialty markets. GoPro operates through wholly-owned subsidiaries in Germany, Hong Kong the Netherlands and the Cayman Islands. It shipped 832,000 camera units during third-quarter 2021.

GoPro intends to transform itself from the ‘camera maker’ to ‘content maker’ and has undertaken steps to diversify into higher-margin businesses, including video editing and virtual reality. The company is developing various types of software solutions and hardware to curtail the complexity of managing, editing and sharing content on different media platforms. It benefits from a solid product line and a direct-to-consumer strategy, with an accretive customer base.

The company is also undertaking investments in merchandising and retail advertising to drive a bigger brand presence while continuing to innovate. It is focused on scaling its customer relationship management and is optimistic about its prospects in end markets mainly on account of enhanced marketing programs, expense control measures, improving channel management as well as upcoming product launches.

It aims to translate the healthy momentum in its business and controlled cost into growth and profitability. The company has been solidifying its position in the burgeoning virtual reality (VR) market. It also announced additional software advancements with its new GoPro VR app. Its products seem well-positioned to dominate the trending VR market. Driven by such positive factors, the company believes that these efforts will pay off in the long term. GoPro would be able to gain exposure to a wider audience, which will expand its user base.

Sonos, Inc. (SONO - Free Report) is another top-ranked stock in the industry, sporting a Zacks Rank #1 (Strong Buy). The consensus estimate for current-year earnings has been revised 10.3% upward in the past 60 days. You can see the complete list of today’s Zacks #1 Rank stocks here.

Sonos delivered a trailing four-quarter earnings surprise of 177.9%, on average. The stock has returned 26.1% in the past year. SONO has a long-term earnings growth expectation of 17%.

International Game Technology PLC (IGT - Free Report) also flaunts a Zacks Rank #1. The Zacks Consensus Estimate for its current-year earnings has been revised 1,021.4% upward in the past 60 days.

International Game Technology delivered a trailing four-quarter earnings surprise of 68.6%, on average. The stock has gained 70.8% in the past year.

TEGNA Inc. (TGNA - Free Report) carries a Zacks Rank #2. The Zacks Consensus Estimate for its current-year earnings has been revised 3.8% upward in the past 60 days.

TEGNA delivered a trailing four-quarter earnings surprise of 2.9%, on average. The stock has gained 37.1% in the past year. TGNA has a long-term earnings growth expectation of 10%.