AstraZeneca PLC (AZN - Free Report) announced that it has closed the previously announced agreement with Ionis Pharmaceuticals, Inc. (IONS - Free Report) for developing and commercializing eplontersen. Formerly known as IONIS-TTR-LRx, eplontersen is Ionis’ investigational medicine being developed for the treatment of transthyretin amyloidosis, a progressive and fatal disease.

Earlier this month, AstraZeneca and Ionis announced the strategic collaboration to jointly develop eplontersen in the United States.

Per the deal, the companies will have joint development and commercialization rights for eplontersen in the United States, while AstraZeneca will have exclusive rights to commercialize it in the rest of the world except Latin America. Ionis will continue to manufacture and supply eplontersen for the existing clinical studies. AstraZeneca will be responsible for commercial supply, and record all sales generated under the agreement.

Per the terms of the deal, AstraZeneca will make an upfront payment of $200 million to Ionis. In addition, Ionis will also be entitled to receive up to $485 million in development and approval milestones, and up to $2.9 billion in sales-related milestone payments as well as royalties in the range of low double-digit to mid-twenties on net sales, upon potential approval.

The above transaction is not likely to have an impact on AstraZeneca’s financial guidance for 2021.

Shares of AstraZeneca have rallied 17.3% so far this year compared with the industry’s growth of 21.1%. 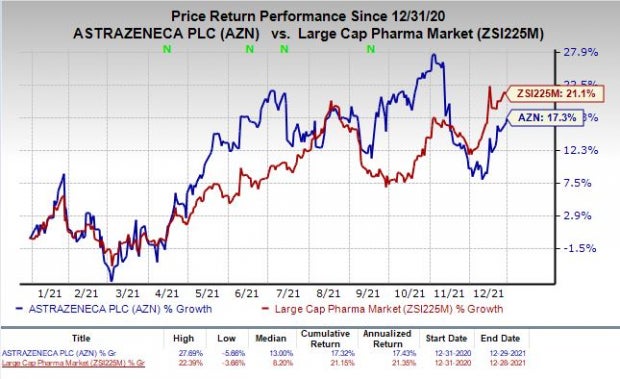 AstraZeneca has engaged in external acquisitions and strategic collaborations to boost its pipeline. The Alexion buyout earlier this year strengthened its immunology franchise, adding several drugs that can boost the company’s top line. The acquisition diversified AstraZeneca’s portfolio, marking its foray into rare diseases an increasingly attractive field.

In addition to acquisitions, AstraZeneca is pursuing co-development deals with companies like Innate Pharma, FibroGen, Moderna and Daiichi Sankyo to boost its pipeline and diversify its portfolio. AstraZeneca also has a profit-sharing deal with Merck for Lynparza and Koselugo (selumetinib).

GlaxoSmithKline’s earnings surpassed estimates in two of the trailing four quarters, missed the same once and matched it once.

Endo International’s earnings surpassed estimates in each of the trailing four quarters.