The IBCS enables warfighters to use any sensor and weapon to achieve mission objectives in a true open architecture environment, thereby increasing battlespace and providing dramatically improved protection. The IBCS offers a fully-integrated environment wherein soldiers trained in surveillance, identification, weapon management, and engagements can collaboratively plan and execute engagements of hostile targets while operating under joint oversight and the rules of engagement.

In recent times, missile defense played a pivotal role in a nation’s defense strategy. IBCS is a major evolution in the software and hardware development process that continues to affirm Northrop Grumman’s leadership in providing net-centric solutions to warfighters.

Per Mordor Intelligence, the missiles and missile defense systems market is estimated to register a CAGR of more than 10% between 2020 and 2025. The growing conflict between various countries and the increasing number of investments in missile defense systems being made by nations are expected to drive the market, thereby creating solid growth opportunities for Northrop, which offers significant missile defense to the U.S. Army and its allies.

Raytheon Missiles & Defense is a leading designer, developer, integrator producer, and sustainer of integrated air and missile defense systems, with the unit serving as a prime contractor or major subcontractor on numerous missile and related programs with the U.S. Department of Defense. Some of its renowned products include StormBreaker smart weapon, Standard Missile-2 and AMRAAM missile.

Raytheon Technologies came out with quarterly earnings of $1.26 per share, beating the Zacks Consensus Estimate of $1.07. RTX stock has gained 20.3% in the past year.

Lockheed’s third-quarter 2021 adjusted earnings of $6.66 per share surpassed the Zacks Consensus Estimate by a whopping 239.8%. LMT boasts a long-term earnings growth rate of 3.6%.

General Dynamics’ third-quarter 2021 earnings from continuing operations of $3.07 per share surpassed the Zacks Consensus Estimate by 3.4%. GD stock has gained 40.1% in the past year.

Shares of Northrop Grumman have gained 27.2% over a year against the industry’s 29.8% decline. 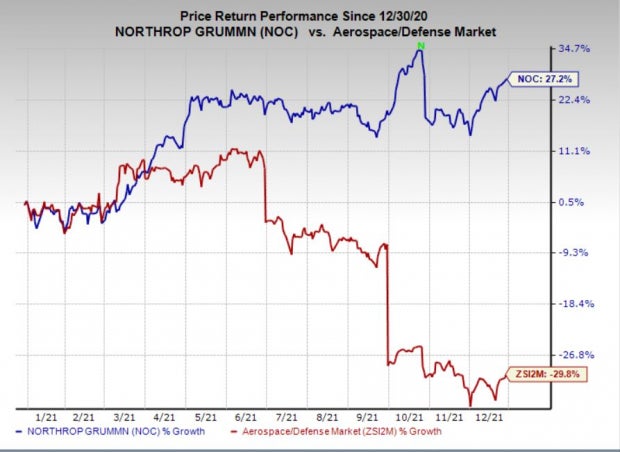