3 Crypto Mining Stocks to Watch for 2022

The buzz around the cryptocurrency market is likely to continue in 2022 and beyond. Higher uptake of digital and contactless trading and payments via blockchain-backed cryptocurrencies in this coronavirus-hit world is expected to sustain the momentum in this particular market.

Solid adoption of bitcoin, the most popular and widely used digital currency despite being highly volatile, has been acting as a key catalyst for the crypto miners so far.

This topsy-turvy situation is expected to remain due to the ongoing regulatory concerns over crypto transactions and crypto mining that witness greater governmental control over the cryptocurrency market.

Nevertheless, the great hedging opportunities that bitcoins offer to investors against inflation are expected to continue bolstering the bitcoin adoption rate as well as driving growth in the cryptocurrency market.

The blockchain technology based on which the entire cryptocurrency market stands minimizes the risks of monetary losses, double counting and hacking as it leverages a distributed consensus that makes tampering with the records very difficult.

In addition, the growing momentum across other digital currencies like litecoin, ethereum and zcash, will likely continue to boost prospects of the crypto miners further.

Cryptocurrencies, which hold the potential to revolutionize the process of peer-to-peer and remittance transactions, are gaining strongly from the decentralized system, low fees, transparency of distributed ledger technology, protection from consumer chargebacks and quick international transfers.

Given this upbeat scenario, many companies worldwide are now adopting the idea of cryptocurrencies as payment options and increasing their bitcoin holdings. This remains another tailwind.

All these factors bode well for the crypto mining companies that are making concerted efforts to capitalize on the pool of opportunities present in the cryptocurrency market.

Per a Data Bridge Market Research report, the global crypto mining market is likely to witness a CAGR of 11.5% between 2021 and 2028.

Against this backdrop, here we focus on three crypto mining stocks with strong fundamentals that poise them well to capitalize on the cryptocurrency boom in the near term.

The following stocks have gained strongly in the year-to-date time frame, outperforming the S&P 500 Index’s rally. 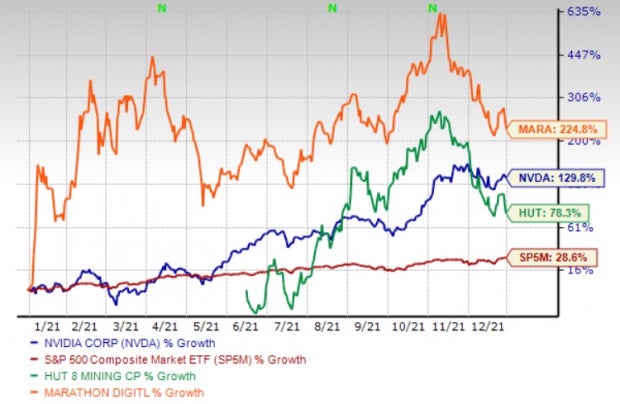 NVIDIA’s (NVDA - Free Report) shares have returned 129.8% on a year-to-date basis. NVDA is strongly gaining from the growing momentum of its GPUs in the cryptocurrency space, which is also providing it with a competitive edge against other chipmakers.

NVDA remains well-poised to capitalize on strong demand for cryptocurrency mining on the back of its notable launch of Cryptocurrency Mining Processor (CMP), which is ideal for professional mining. These processors are well-equipped to boost the mining power efficiency as these feature a lower peak core voltage and frequency.

In third-quarter fiscal 2022, this currently Zacks Rank #2 (Buy) player generated revenues worth $105 million from the inclusion of Cryptocurrency Mining Processors in its market platform.

Marathon Digital Holdings’ (MARA - Free Report) shares have gained 224.8% on a year-to-date basis. MARA is one of the largest enterprise bitcoin self-mining companies in North America. It is benefiting from the increasing deployment of miners, growing production of bitcoins, robust bitcoin holdings and a hike in its hash rate.

The currently Zacks Rank #3 (Hold) player produced 1,252 self-mined bitcoins in the recently reported third-quarter 2021, up 91% from the previous quarter’s output. Further, its number of miners deployed reached the 25,272 mark at the end of the same quarter. Marathon Digital held 7,035 bitcoins as of Sep 30, 2021.

This apart, the purchase of 30,000 S19j Pro miners from BITMAIN remains a major step toward expanding the bitcoin production. Further, Marathon Digital recently signed a contract with BITMAIN to buy ANTMINER S19 XP (140 TH/s) bitcoin miners, which are expected to be shipped between July 2022 and December 2022. This is a major positive as well.

Hut 8 Mining’s (HUT - Free Report) shares have gained 78.3% on a year-to-date basis. HUT is counted among the digital asset mining pioneers. The same is gaining from the solid momentum across its self-mining operations and expanding hosting services. Further, HUT’s increasing bitcoin holdings and prospects around its purchase of NVIDIA GPUs are noteworthy.

Additionally, Hut 8 Mining received the entire fleet of high-performance NVIDIA GPUs, which got deployed at its Medicine Hat site. HUT strives to mine the Ethereum network via Luxor pool with the help of these servers. Moreover, the move is likely to boost its aggregate operating rate by approximately 1,600 Gigahash. This apart, Hut’s building of the third mining site in North Bay, Ontario, remains noteworthy.

A Quick Peek Into Major Auto Headlines of 2021