HSBC Asia-Pacific’s co-CEO, David Liao, stated, “Growing our insurance business is key to delivering on our strategic priority of being a leading wealth manager in Asia. Full ownership of HSBC Life China brings us closer to this goal, and shows our commitment to expanding our broader wealth offering in mainland China.”

Greg Hingston, the CEO designate of HSBC Global Insurance and Partnerships, added, “With full ownership, we will have greater flexibility in accelerating our growth plans. In tandem with HSBC Pinnacle, our digital and mobile wealth planning and insurance platform, we will be able to significantly expand our capabilities to serve the growing wealth and insurance needs of our customers in China, particularly in the Greater Bay Area.”

Notably, the deal to buy the remaining 50% stake in HSBC Life China was entered by HSBC in May 2020. It was decided back then that the deal would be structured as a transfer of equity interest.

HSBC, which holds a dominant position in the Asia markets, has been aiming to become the region’s top wealth manager by 2025.

This February, the bank announced that it is on an expansion spree and it plans to hire 5,000 wealth planners in Asia over the next five years. Along with this, it announced plans of injecting $3.5 billion worth of capital in the region, of which approximately two-thirds will be used to bolster the bank’s distribution competencies via new hires and technology improvements.

Further, HSBC has stated plans of shifting capital from the underperforming businesses in Europe and the United States to invest $6 billion in Asia over five years. The capital will mostly cater to amplify its wealth management business since management intends to target wealthy clients in mainland China, Hong Kong, Singapore and other parts of the region.

Notably, in addition to taking full ownership of HSBC Life China, HSBC continues to invest in its China insurance business amid plans of expanding footprint in the region. In 2020, HSBC initiated a digital-first, hybrid financial management platform — HSBC Pinnacle — in China. It hired 200 wealth managers in Shanghai, Hangzhou and Shenzen last year. Currently, nearly 700 personal wealth planners are onboard. The bank expects to recruit 3,000 wealth planners by 2025-end.

HSBC’s expansion plans in Asia are expected to help offset some of the adverse impacts that the low interest rate environment has been putting on its top line. Nevertheless, competition for fee-generating sustainable businesses in Asia might intensify over the medium term.

Also, while the company’s initiatives to improve market share in China will likely support its financials over the long term, it might lead to an increase in expenses. Elevated expenses might hurt the company’s bottom line to an extent.

Over the past year, shares of HSBC have gained 16.5% compared with 12% growth recorded by the industry. 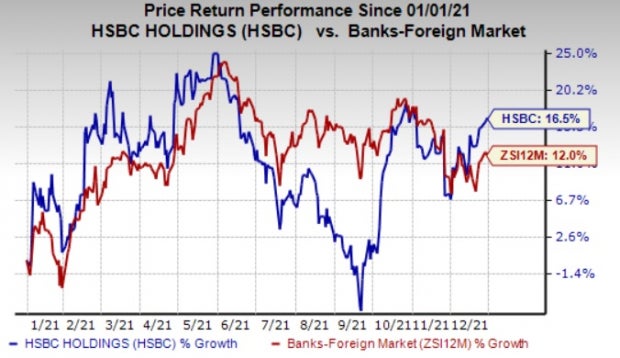 The Zacks Consensus Estimate for Bank of Nova Scotia’s current fiscal-year earnings has been revised upward by 7.1% over the past 60 days. BNS shares have gained 32.7% in the past year.

Tesla (TSLA) Recalls 475K Plus US Cars Over Potential Defects