Valued at $30.9 million, the contract is expected to get completed by November 2024. Per the terms, Electric Boat will offer lead yard support and development studies and design efforts related to Virginia-class submarines.
Work related to the deal will be executed in Groton, CT.

In recent times, the United States and other countries have globally increased their spending manifold for upgrade and betterment of defense systems fueled by rising geopolitical tensions. Missile submarines with undersea warfare capabilities form an integral part of any nation’s defense system. To this end, it is imperative to mention that General Dynamics remains one of the two defense contractors on a worldwide basis that is equipped to build stealth missile submarines.

In fact, the Virginia-class submarine is one of the most advanced nuclear-powered multisession stealth submarines suitable for marine warfare. The submarine excels in littoral and open-ocean environments and collects intelligence critical to the full spectrum of warfare. They are also capable of extended submerged operations with superior stealth, endurance, mobility and firepower.

Such enhanced features made the Virgin-class submarine an ideal choice for the U.S Navy. This provides General Dynamic an edge, as it enjoys a dominant position as the manufacturer of nuclear-powered submarines.

Submarines play a very vital role in any defense system and the demand for more reliably equipped submarines is expected to grow in the days ahead as nations strengthen their naval power. Evidently, per a report from Research and Markets firm, the global submarine market is projected to witness a 4% CAGR during the period of 2020-2024. Consequently, such strong growth trends highlight ample growth opportunities for General Dynamic as it enjoys a lucrative position in the submarine market.

BAE System designs, builds, tests and commissions highly sophisticated nuclear-powered submarines that are capable of circumnavigating the globe without surfacing. Its Astute class submarines are the U.K.’s largest and most powerful attack submarines and can strike at targets up to 1,000 km from the coast with pinpoint accuracy.

The long-term earnings growth rate estimate for BAE Systems is pegged at 3.6%. Shares of BAESY have appreciated 8.8% in the past year.

Mitsubishi designs and manufactures submarines for the Japanese government. It is well known for its two submarines, namely SETOSHIO and SORYU.

The Zacks Consensus Estimate for BAE Systems’ fiscal 2022 earnings indicates an improvement of 127.2% on a year-over-year basis. Shares of MHVYF have increased 1.9% in the past month.

Huntington Ingalls is into designing and building nuclear-powered submarines for the U.S. Navy. The company holds a dominant position in the submarine industry, with the United States being a stalwart in the global defense space.

The Zacks Consensus Estimate for Huntington’s 2021 earnings has been revised 0.4% upward in the past 60 days. Shares of HII have gained 8.7% in the past year.

In the past year, shares of General Dynamics have gained 39.5% against the industry’s decline 30.5% decline. 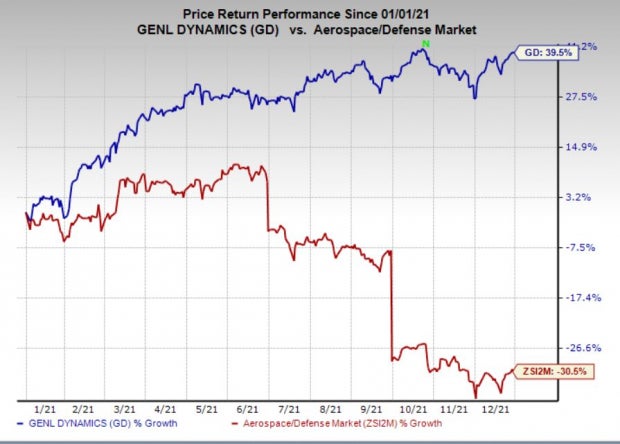