Here's Why It's Wise to Retain Equinix (EQIX) Stock Now

Equinix’s (EQIX - Free Report) is well-positioned to gain from tailwinds, such as high demand for inter-connected data-center space, driven by the acceleration in enterprise cloud adoption and the increasing cloud or Internet customers’ demands. To cater to this rising demand, EQIX is expanding its International Business Exchange data centers, globally. However, huge capital outlays required for expansion moves act as headwinds. Also, intense competition from the carrier-neutral data centers is concerning.

High growth in cloud computing, the Internet of Things and big data, and elevated demand for third-party IT infrastructure are spurring demand for data-center infrastructure. Moreover, growth in artificial intelligence as well as autonomous vehicle and virtual/augmented reality markets is anticipated to be robust over the next five-six years.

Equinix is capitalizing on these tailwinds by developing and acquiring data centers, globally. Earlier this month, EQIX announced its plan to tap the growing African market with the takeover of MainOne. EQIX’s efforts to bolster its presence in Africa will add scale and strengthen its position in the region, while helping it benefit from sturdy growth of data consumption.

Shares of this currently Zacks Rank #3 (Hold) player have appreciated 6% in the past six months, outperforming the industry’s rise of 0.4%. However, the Zacks Consensus Estimate for its 2021 funds from operations (FFO) per share has moved south marginally to $27.1 over the past month. 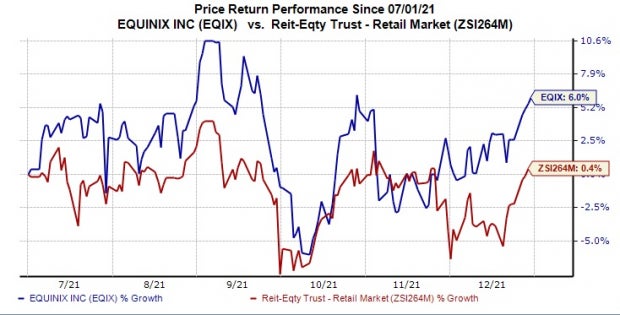 Equinix plans to add data centers in the coming quarters to satisfy growing demand for colocation and interconnection services. Although such moves are a strategic fit, the same requires huge capital outlays and is likely to affect near-term performance.

Also, considering the strong growth potential of this industry, competition is expected to increase from the existing as well as new players into the space. The intensified competition could prompt competitors to resort to aggressive pricing policies, making Equinix vulnerable to pricing pressure.

OUTFRONT Media flaunts a Zacks Rank #1 (Strong Buy) at present. Shares of OUT have gained 11% in the past six months.

The Zacks Consensus Estimate for OUTFRONT Media’s 2021 FFO per share has been raised 13.8% over the past two months. OUT’s 2021 FFO per share is expected to increase 45.71% from the year-ago reported figure. You can see the complete list of today’s Zacks #1 Rank stocks here.

The Zacks Consensus Estimate for Cedar Realty’s current-year FFO per share has been raised 2.6% to $2.36 in the past two months. Over the last four quarters, CDR’s FFO per share surpassed the consensus mark twice and missed the same on the other two occasions, the average surprise being 6.4%.

Currently, CDR sports a Zacks Rank of 1. Shares of Cedar Realty have appreciated 51.6% in the past six months.

Condor Hospitality sports a Zacks Rank of 1 at present. Shares of CDOR have rallied 31.4% in the past six months.

Note: Anything related to earnings presented in this write-up represent FFO — a widely used metric to gauge the performance of REITs.