ExxonMobil (XOM) Expects Earnings of Nearly $1.9B in Q4

The price of oil and natural gas has increased significantly in the past year. For the upstream segment, the massive improvement in commodity prices could have increased fourth-quarter 2021 earnings by up to $1.9 billion from the previous quarter’s levels.

ExxonMobil incurred a loss of $22.4 billion in 2020. A large portion of the loss came from $19.3 billion in write-downs in the last few months of the year as the company marked down the value of the natural gas fields acquired when gas prices were significantly higher.

ExxonMobil’s cost-reduction initiatives along with rising energy prices helped it to reduce debt and plot a share buyback program in 2021. The company is well-positioned to capitalize on the rising commodity prices.

Shares of ExxonMobil have outperformed the industry in the past three months. XOM has gained 0.5% against the industry’s 0.6% decline. 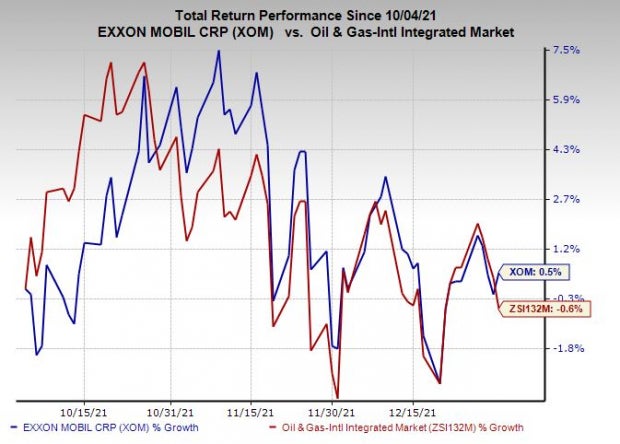 Canadian Natural Resources Limited (CNQ - Free Report) is one of the largest independent energy companies in Canada. CNQ has a broad portfolio of low-risk exploration and development projects, with a strong international exposure that yields long-term volume growth at above-average rates. As of 2020-end, CNQ had 12.106 billion oil-equivalent barrels (BOE) in its total proved reserves.

In the past six months, shares of Canadian Natural Resources have increased 18.5% compared with the industry’s growth of 15.7%. CNQ currently has a Zacks Style Score of B for Growth. The company raised its dividend by 25% in November, reflecting strength in its cash flows. CNQ is counted as a ‘Canadian Dividend Aristocrat’ with an attractive yield. Canadian Natural Resources has a solid track record of dividend hikes, increasing its payout for 22 consecutive years.

PDC Energy (PDCE - Free Report) is an independent upstream operator, which engages in the exploration, development and production of natural gas, crude oil and natural gas liquids. PDCE, which reached its present form following the January 2020 combination with SRC Energy, is currently the second-largest producer in the Denver-Julesburg Basin. As of 2020-end, PDC Energy's total estimated proved reserves were 731,073 thousand barrels of oil equivalent.

In the past six months, shares of PDC Energy’s have increased 6.2% compared with industry’s growth of 5.7%. PDCE currently has a Zacks Style Score of B for both Growth and Momentum. PDCE beat the Zacks Consensus Estimate in the last four quarters, with an earnings surprise of 51.06%, on average. As of Sep 30, 2021, PDC Energy had $1.7 billion in total liquidity, while its credit facility currently has a total borrowing base of $2.4 billion. PDCE’s debt maturity profile is a favorable one.

Sunoco LP (SUN - Free Report) is a master limited partnership that engages in the distribution of motor fuel to nearly 10,000 customers, including independent dealers, commercial customers, convenience stores and distributors. In the United States, Sunoco is among the largest motor fuel distributors in the wholesale market by volume. In 2020, the partnership sold a total of 7.1 billion gallons of motor fuel.

In the past six months, shares of Sunoco have increased 11.8% compared with industry’s growth of 5.2%. SUN currently has a Zacks Style Score of A for Value and B for both Growth and Momentum. For 2021, Sunoco expects fuel volumes within 7.25-7.75 billion gallons, indicating a rise from the 2020 level of 7.09 billion gallons.