Shares of Apellis Pharmaceuticals, Inc. (APLS - Free Report) have rallied 43.3% in the past three months against the industry’s decrease of 6.1%. 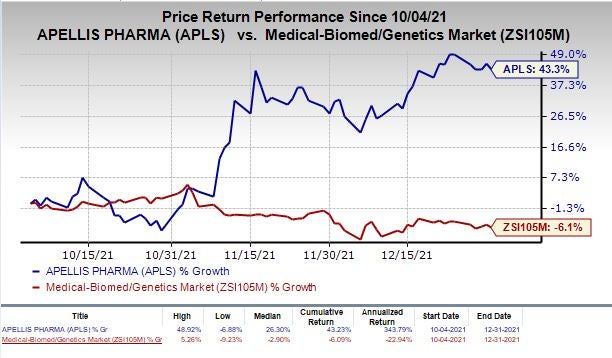 The company has made steady progress with its lead drug, Empaveli (pegcetacoplan), which is approved by the FDA as a monotherapy treatment for adult patients suffering from paroxysmal nocturnal hemoglobinuria (“PNH”). A rare blood disorder, PNH is associated with abnormally low hemoglobin levels as the disease destroys red blood cells. The company has seen a strong initial uptake of Empaveli since its approval in May 2021.

Empaveli is approved for treatment-naïve patients as well as for those switching from Alexion’s [now part of AstraZeneca’s (AZN - Free Report) ] C5 inhibitor therapies for PNH, namely Soliris and Ultomiris (ravulizumab).

In July 2021 AstraZeneca closed the acquisition of rare disease drugmaker, Alexion, for $39 billion.

In December 2021, the European Commission approved Aspaveli for the treatment of adult patients with PNH who are anemic after treatment with a C5 inhibitor for at least three months. The drug is marketed under the trade name Empaveli in the United States.

Following the nod, Aspaveli became the first and only targeted C3 therapy to be approved in Europe for the treatment of PNH.

Pegcetacoplan, as a monotherapy, is being evaluated in two phase III studies, namely, DERBY and OAKS, for treating patients with geographic atrophy or GA. In September 2021, Apellis announced mixed top-line data from the DERBY and OAKS studies. While the OAKS study met the primary endpoint, the DERBY study did not.

In November 2021, Apellis announced that it will submit a new drug application for intravitreal pegcetacoplan to treat GA in the first half of 2022. The company received a formal, written feedback from the FDA that reinforced its decision to do the same.

Pegcetacoplan is also being investigated in the phase II MERIDIAN study for treating amyotrophic lateral sclerosis or ALS. A potential label expansion of the drug for any of the above indications will boost sales and drive growth for the company.

Sarepta Therapeutics’ loss per share estimates have narrowed 28.2% for 2022, over the past 60 days.

5 Reasons Why You Should Invest in Charles River (CRAI) Stock