City Office REIT, Inc. (CIO - Free Report) closed the acquisition of Bloc 83, a premier two-building complex of office and street-level retail in downtown Raleigh, NC, for a gross purchase price of $330 million. The buyout of this newly-built Class A, 494,487 square foot asset will strengthen CIO’s footprint in the growing Raleigh market.

Bloc 83 is conveniently located in the Glenwood South submarket of Raleigh. As a pre-eminent live-work-play district, Glenwood South grabbed much attention of young professionals who relocate from larger metro areas. Glenwood South is the center of Raleigh's dining, shopping and entertainment zone.

Per management, "Adding Raleigh to our footprint of high growth markets in the south and west strategically enhances our portfolio."

City Office currently carries a Zacks Rank #3 (Hold). The stock has gained 56.7%, outperforming the industry’s rally of 11.7% over the past six months. 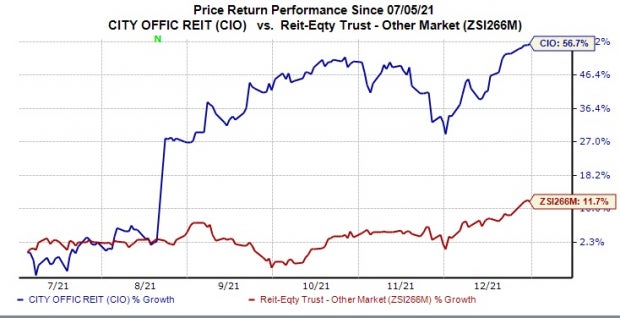 OUTFRONT Media flaunts a Zacks Rank #1 (Strong Buy) at present. Shares of OUT have gained 9.9% in the past six months.

The Zacks Consensus Estimate for OUTFRONT Media’s 2021 funds from operations (FFO) per share has been raised 13.8% over the past two months. Over the last four quarters, OUT’s FFO per share surpassed the consensus mark thrice and was in line with the other, the average surprise being 44.9%. You can see the complete list of today’s Zacks #1 Rank stocks here.

The Zacks Consensus Estimate for Cedar Realty’s 2021 FFO per share has been raised 2.6% to $2.36 in the past two months. Over the last four quarters, CDR’s FFO per share surpassed the consensus mark twice and missed the same on the other two occasions, the average surprise being 6.4%.

Currently, CDR sports a Zacks Rank of 1. Shares of Cedar Realty have appreciated 52.6% in the past six months.

Cubesmart carries a Zacks Rank #2 (Buy) at present. Shares of CUBE have rallied 21.5% in the past six months.

Note: Anything related to earnings presented in this write-up represents FFO — a widely used metric to gauge the performance of REITs.