Albemarle Corporation’s (ALB - Free Report) shares have popped 38.7% over the past six months. The rally has resulted in the stock outperforming its industry’s rise of 2.7% over the same time frame. The company has also topped the S&P 500’s 9.5% rise over the same period. 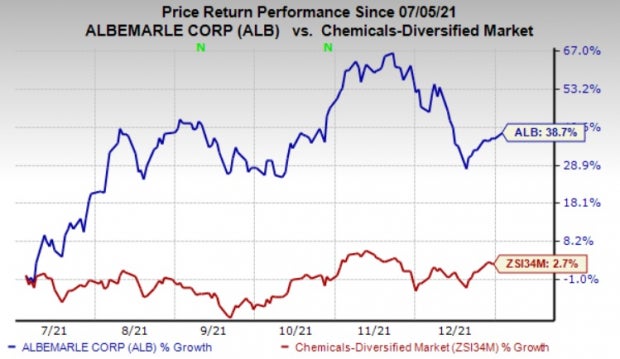 The company is also strategically executing its projects aimed at boosting its global lithium derivative capacity. It remains focused on investing in high-return projects to drive productivity. The company is well placed to gain from long-term growth in the battery-grade lithium market.

Albemarle is also benefiting from cost-saving and productivity initiatives. Its cost actions are expected to support its margins. The company expects to achieve $75 million of productivity improvement on a year-over-year basis for full-year 2021.

The company also remains committed to deliver incremental returns to its shareholders. It has raised its annual dividend for the 27th straight year. Albemarle remains focused on maintaining its dividend payout. It remains committed to maintain adequate financial flexibility with ample liquidity. It had liquidity of around $2 billion at the end of the third quarter of 2021.

Earnings estimates for Albemarle have also been going up over the past two months. The Zacks Consensus Estimate for the current year has increased around 11.1%. The favorable estimate revisions instill investor confidence in the stock.

Chemours currently sports a Zacks Rank #1. The Zacks Consensus Estimate for CC's current-year earnings has been revised 9.2% upward over the past 60 days. You can see the complete list of today’s Zacks #1 Rank stocks here.

Chemours beat the Zacks Consensus Estimate for earnings in each of the trailing four quarters, the average being 34.2%. CC has gained around 29% in a year.

Commercial Metals carries a Zacks Rank #1. CMC's consensus estimate for the current fiscal year has been revised 6.6% upward over the past 60 days.

Commercial Metals beat the Zacks Consensus Estimate for earnings in three of the last four quarters while missing it once. It has a trailing four-quarter earnings surprise of roughly 7.4%, on average. CMC has rallied around 72% in a year.

United States Steel currently carries a Zacks Rank #2 (Buy). The Zacks Consensus Estimate for X's current-year earnings has been revised 5.9% upward over the past 60 days.

United States Steel beat the Zacks Consensus Estimate for earnings in each of the trailing four quarters, the average being 24.5%. X shares have popped around 32% in a year.