The transaction will result in enhanced scale and improved profitability. It will also help boost shareholder value. The combined company, which will now operate under the First Citizens name, has more than $100 billion in assets, serving more than 600 branches in 22 states and a national direct bank.

CIT Group, CIT Bank and OneWest Bank will initially operate as divisions of First Citizens Bank, with customers continuing to bank as they normally do. In the coming months, a series of conversions to First Citizens' systems and operations will take place.

The former chairwoman and CEO of CIT Group, Ellen R. Alemany, along with First Citizens' vice chairwoman, Hope Holding Bryant, will now serve on the combined firm's board. The new board has 11 current First Citizens directors and three former CIT Group board members.

First Citizens' chairman and CEO, Frank B. Holding Jr., stated, "This is a transformational milestone in our 124-year history. It brings together two companies with deep traditions of service and excellence. We're not just creating a bigger bank – we're creating an even better bank – one that helps more people in more places and strengthens the communities we serve. Completion of the merger is a testament to the many associates on our teams who have worked so diligently to get us here."

Holding added, "For CIT clients, First Citizens brings its proven record of safety, security and focus on long-term relationships while maintaining the expertise and agility that they have come to expect. For First Citizens customers, everything they count on us for will stay the same: same service, same values, same commitment to helping them do more with their money. In the long term, all our customers will get even more services, more ways to manage their money and more places to find us."

At the time of the deal announcement, it was agreed that shareholders of CIT Group would get 0.0620 shares of First Citizens' common stock for each of their own shares held. First Citizens' shareholders would, thus, own 61% of the combined firm and the remaining 39% would be owned by CIT Group's stockholders.

At the time of the deal announcement, it was expected that pro-forma, the merger would result in combined non-interest expense savings of 10% or $250 million (fully phased-in). Merger-related costs were expected to be $445 million.

Tangible book value per share accretion of more than 30% was expected at close. On a pro-forma basis, it was expected that the combined firm would deliver top-tier operating performance, with a return on tangible common equity (ROTCE) of 13%.

Over the past six months, shares of First Citizens have rallied 11.4% compared with 13.8% growth of the industry. 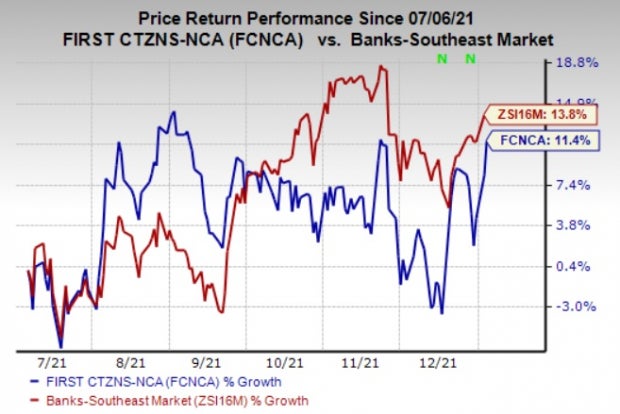 Over the last few months, several finance sector companies have made consolidation efforts to counter the low-interest-rate environment and heightened costs of investments in technology.

FirstCash has a proven performance history in retail-based operations, primarily for cash-and-credit constrained consumers. Via the acquisition, FCFS will become a pioneer in the complementary and burgeoning point-of-sale and buy-now-pay-later payment space.

The buyout brought together two high-performing banking companies. It also bolsters United Bankshares' position as one of the largest and best-performing regional banking companies in the Mid-Atlantic and Southeast. The combined entity will now operate across 250 locations in opportunistic markets in the United States.