Sony Group Corporation (SONY - Free Report) recently unveiled a virtual reality (“VR”) headset for its PS5 gaming console. Dubbed PSVR2, the new headset is billed to be one of the best-selling products in its category with an immersive gaming experience that is likely to capitalize on the increasing metaverse hype.

The PSVR2 is equipped with upgraded hardware for improved headset features and VR2 Sense controllers for greater immersion capabilities. These include increased visual fidelity, head and eye tracking, a 110-degree field of view, adaptive triggers and haptic feedback. These, in turn, are likely to enable the gamers “interact with games in a much more visceral way.” The headset could be easily fitted with a single cable connected directly to PS5.

Sony also launched an exclusive game that will be among the first to tap the capabilities of the new headset. Titled Horizon Call of the Mountain, the game will share its universe with the previous edition Horizon Zero Dawn and the upcoming Horizon Forbidden West. However, the company did not provide the release date of either the headset or the game.

Sony launched PS5 in November 2020 to tap the uptick in pandemic-induced nesting activities — games, streaming video, and home fitness. The gaming console was an instant hit with customers and was immediately sold out worldwide, reportedly more than 10 million units to date. Sony has loaded the product with updated graphics, a newly-redesigned controller, and a collection of exclusive games. With a powerful 8-core AMD Zen 2 processor, 10.3 teraflops of graphics power, gorgeous 4K visuals and an immersive end-user experience, the PS5 promises one of the best performances witnessed in a gaming console. Moreover, PS5 loads games about 10 to 20 seconds faster than the PS4 Pro and can even read physical discs a few minutes faster, making it an ideal choice for tech-savvy gamers.

Microsoft is one of the three largest providers of gaming hardware. Its Xbox console was one of the first gaming devices of its kind. Microsoft supplemented the hardware with a number of popular video game titles. It also introduced the Xbox Live online gaming service, which enabled subscribers to play online Xbox games with each other and download new games directly onto the device.

Nintendo has particularly flourished during the pandemic with its social simulation game titled ”Animal Crossing: New Horizons.” However, it faced supply chain disruptions and global chip shortages, forcing it to trim its sales forecast for 2021 by 6% to 24 million units.

Although Sony is expected to face some supply chain headwinds for the PSVR2 headset as well, it is betting big on its success. The stock has gained 27.2% over the past year compared with the industry’s rise of 21.8%, driven by healthy revenues on the back of a flexible business model and solid market response for the PS5 gaming console. We remain impressed with the inherent growth potential of this Zacks Rank #3 (Hold) stock. 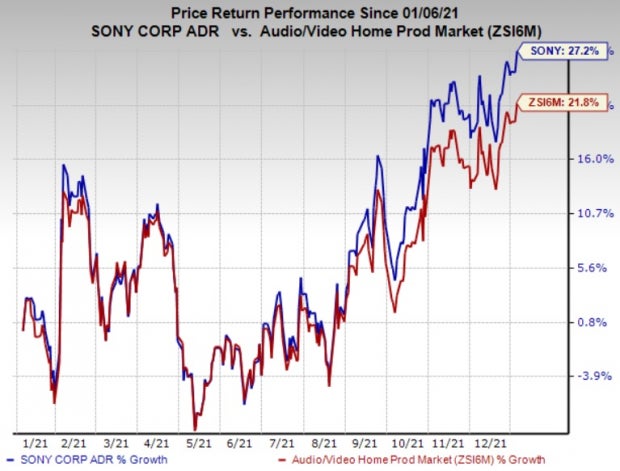 A better-ranked stock in the industry is Sonos, Inc. (SONO - Free Report) , sporting a Zacks Rank #1 (Strong Buy). You can see the complete list of today’s Zacks #1 Rank stocks here.

Sonos delivered an earnings surprise of 177.9%, on average, in the trailing four quarters. It has a long-term earnings growth expectation of 17%. Earnings estimates for SONO’s current year have moved up 46.6% since January 2021. Over the past year, Sonos has gained a modest 24.8%.