TC Energy Corporation’s (TRP - Free Report) Keystone oil pipeline recommenced its operations following a shutdown for unplanned maintenance due to the freezing winter weather in western Canada, per a report by Reuters.

The Keystone oil pipeline, which transports crude from Alberta’s oil sands province to the U.S. Midwest, was challenged by the extremely chilly weather at its Hardisty terminal in central Alberta. The pipeline has the capacity to deliver up to 590,000 barrels of oil per day.

With temperatures from North Dakota to Northern Alberta far below normal, TC Energy’s Keystone pipeline was temporarily shut down on Jan 4, which affected the oil flow through its Hardisty terminal. Almost all of Alberta was under extreme cold warnings, which was expected to last until the weekend.

TC Energy's Gulf Coast operations in the United States were not affected by the freezing weather. The company mentioned that the unplanned maintenance on the Keystone pipeline began on Jan 4. Following this, operations at the pipeline resumed safely amid the extremely cold weather.

The disruptions could have reduced supplies at times when U.S. stockpiles were already declining every week since mid-November and approaching September’s three-year low. Following the shutdown, Canada heavy crude prices tightened as traders anticipated risks of oil sands production due to the cold weather.

Shares of the company have underperformed the industry in the past three months. Its stock has lost 3.2% compared with the industry’s 1.2% decline. 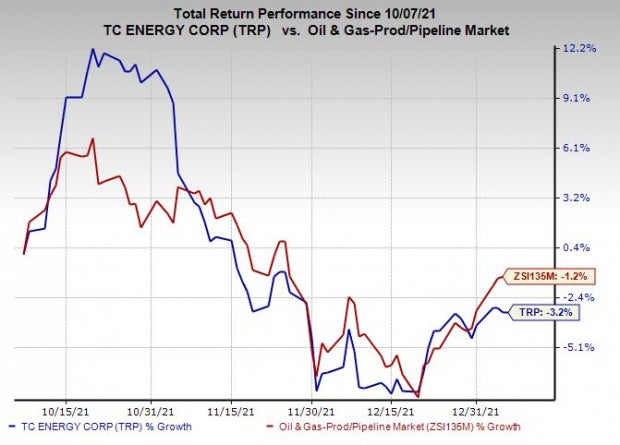 Schlumberger Limited (SLB - Free Report) is a leading oilfield services company, providing services to oil and gas explorers, and producers across the world. Being the leading provider of technology for complex oilfield projects, Schlumberger is better positioned than most peers to take up new offshore projects in the shallow water basins outside North America.

In the past year, shares of Schlumberger have gained 36% compared with the industry’s growth of 20.6%. SLB currently has a Zacks Style Score of B for Value, Growth and Momentum. The company anticipates completing 2021 with robust momentum and projects continued growth in the December quarter.

Halliburton Company (HAL - Free Report) is one of the largest oilfield service providers in the world, offering a variety of equipment, maintenance, and engineering and construction services to the energy, industrial and government sectors. The company operates in over 80 countries.

In the past year, the stock has gained 24.7% compared with the industry’s growth of 20.5%. The overall depth of Halliburton’s global oilfield service franchise is evident from the fact that the company generated a free cash flow tally of more than $1.1 billion in a year as volatile as 2020. It followed it up with approximately $900 million of free cash flow in the first three quarters of 2021. Halliburton’s ample cash flows provide it with the flexibility to pursue a growth-oriented initiative.

In the past year, the stock has gained 32.6% compared with the industry’s growth of 20.8%. Williams' debt maturity profile is in good shape with its $4.5-billion revolver maturing in 2023. Williams is also paying its shareholders an attractive dividend, yielding nearly 6%. Besides, the company's board recently approved a new share repurchase program worth $1.5 billion, highlighting the commitment to shareholders.