Despite the omicron variant of COVID-19 ravaging Europe, Ryanair Holdings’ (RYAAY - Free Report) December traffic surged 400% year over year. In the United States, the omicron variant is also creating havoc and ruining holiday travel plans. With crew members being affected in large numbers, airlines are grappling with staffing crisis. To combat the crisis, United Airlines (UAL - Free Report) is reportedly offering triple pay to its pilots who pick up extra trips in January.

1 Omicron-related staffing shortage coupled with bad weather conditions in parts of the United States have caused multiple flight cancellations in the United States since the Christmas Eve. Amid such a bleak scenario, United Airlines reached an agreement with its pilots’ union, the Air Line Pilots Association, offering pilots higher pay to cover open trips. Pilots were offered three-and-a-half times their pay for flying open trips between Dec 30 and Jan 3. Additionally, they are being offered thrice their pay for picking up trips between Jan 4 and Jan 29.

2. With air-travel demand improving, courtesy of increased vaccination, December traffic surged at Ryanair to 9.5 million from 1.9 million in December 2020. Load factor (percentage of seats filled with passengers) in December 2021 was 81% compared with 73% in December 2020.

4. To modernize and expand its fleet, Allegiant Travel placed an order to Boeing for purchasing 50 new 737 MAX aircraft. Per the deal, Allegiant will buy the 737-7 and 737-8-200 models. The agreement allows ALGT to replace the planes scheduled to retire while expanding the fleet simultaneously as it aims to achieve the projected 10% plus annual growth rate.

Additionally, ALGT has options to purchase 50 additional aircraft. Allegiant intends to take delivery of an initial group of planes in 2023, with the remaining scheduled for 2024 and 2025. The deal with Boeing marks a shift in strategy for ALGT as far as its fleet is concerned. This is because it currently operates an all-airbus fleet. 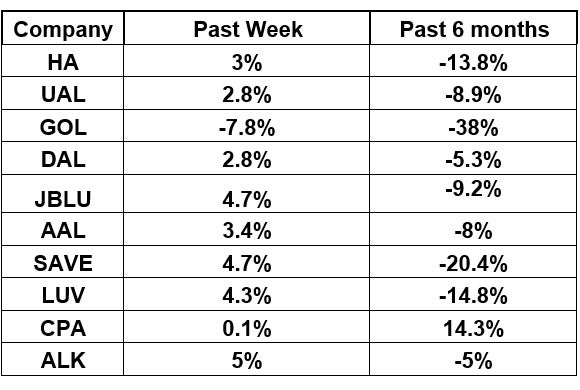 December traffic reports from some carriers are expected in the coming days.