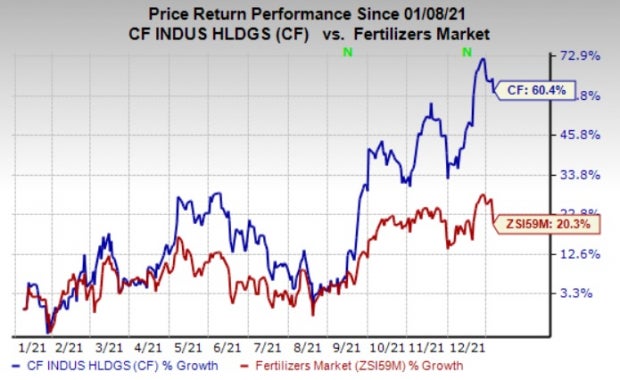 The company is also benefiting from higher nitrogen prices on the back of lower supply resulting from reduced operating rates across Europe and Asia due to higher energy prices. Higher nitrogen prices are driving its sales as witnessed in the last-reported quarter. The positive pricing environment is expected to continue moving ahead.

The company, last month, raised its adjusted EBITDA outlook for full-year 2021 to $2.65-2.85 billion from the earlier guidance of $2.2-2.4 billion. The upside reflects continued strong global nitrogen market conditions that have led to higher-than-expected realized pricing for products sold on an index basis.

The company remains committed to boosting shareholders’ value by leveraging strong cash flows. It generated cash flow from operations of $687 million in the third quarter of 2021, up around 208% year over year. During the third quarter, the company repurchased around 1.1 million shares for $50 million. Its board, in Nov 2021, approved a new $1.5 billion share repurchase program. The program, which is effective Jan 1, 2022, runs through the end of 2024.

Earnings estimates for CF Industries have also been going up over the past two months. The Zacks Consensus Estimate for 2022 has increased around 30%. The favorable estimate revisions instill investor confidence in the stock.

Albemarle, currently sporting a Zacks Rank #1, has an expected earnings growth rate of 49.8% for the current year. The Zacks Consensus Estimate for ALB's current-year earnings has been revised 9.2% upward over the past 60 days. You can see the complete list of today’s Zacks #1 Rank stocks here.

Albemarle beat the Zacks Consensus Estimate for earnings in each of the trailing four quarters, the average being 22.1%. ALB shares have gained around 27% in a year.

Commercial Metals beat the Zacks Consensus Estimate for earnings in three of the last four quarters while missed once. It has a trailing four-quarter earnings surprise of roughly 7.4%, on average. CMC has rallied around 58% in a year.

AdvanSix, carrying a Zacks Rank #2 (Buy), has an expected earnings growth rate of 3.9% for the current year. The Zacks Consensus Estimate for ASIX’s current-year earnings has been revised 1.6% upward in the past 60 days.

AdvanSix beat the Zacks Consensus Estimate for earnings in each of the trailing four quarters, the average being 46.9%. ASIX has rallied around 112% in a year.