To boost its loyalty program offerings for both gaming and non-gaming guests, MGM Resorts International (MGM - Free Report) recently announced the rollout of its reimagined loyalty rewards program — MGM Rewards — starting Feb 1, 2022. Following the news, shares of the company moved up 3% during trading hours on Jan 6.

The program integrates both non-gaming and gaming activity, thereby allowing members to earn points on nearly all expenditures at MGM Resorts destinations. The points are redeemable for complimentary food and beverage, entertainment as well as hotel stays.  Also, the enhanced MGM Rewards app simplifies the digital experience along with an easy review of tier status and benefits. The company stated that the five-member tier levels — Sapphire, Pearl, Gold, Platinum and NOIR – remained intact.

Anil Mansukhani, MGM Resorts' vice president of Loyalty Marketing, stated, " As every guest experiences our properties in unique ways, MGM Rewards is designed to recognize and reward every member with experiences uniquely suited to their preferences, whether that's attending an incredible concert, enjoying a world-class meal or staying in a luxury suite.”

Benefits of The Program

The company announced collaborations with Hyatt Hotels, Southwest Airlines, Avis Rental Cars, Royal Caribbean and Celebrity Cruise Lines to boost reward offerings across land, air and sea. Additional partnerships with premier brands are in the pipeline, which are likely to boost loyalty program offerings in the upcoming periods. 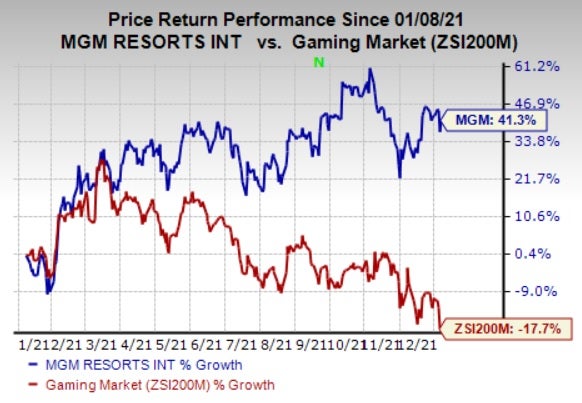 Shares of MGM Resorts have appreciated 41.3% in the past year against the industry’s decline of 17.7%. The company has been benefiting from sports-betting expansion, asset light strategy, non-gaming activities and digital initiatives. Sports betting and iGaming continues to be a major growth driver for the company. The company is optimistic regarding BetMGM operations as it anticipates revenue contributions of more than $1 billion in 2022. Despite the pandemic scenario, the company is confident about its prospects in Macau and will continue to invest in the same. Nevertheless, earnings estimates for 2022 have moved up in the past 30 days, depicting analysts’ optimism regarding the stock’s growth potential.

Hilton Grand Vacations sports a Zacks Rank #1. The company has a trailing four-quarter earnings surprise of 411.1%, on average. Shares of the company have increased 65.5% in the past year.

The Zacks Consensus Estimate for Hilton Grand Vacations’ 2022 sales and earnings per share (EPS) suggests growth of 27.7% and 154.4%, respectively, from the year-ago period’s levels.

Bluegreen Vacations flaunts a Zacks Rank #1. The company has a trailing four-quarter earnings surprise of 695%, on average. Shares of the company have surged 167.8% in the past year.

The Zacks Consensus Estimate for Bluegreen Vacations’ 2022 sales and EPS indicates a rise of 7.6% and 0.4%, respectively, from the year-ago period’s levels.

Century Casinos carries a Zacks Rank #2 (Buy). The company has a trailing four-quarter earnings surprise of 758.9%, on average. Shares of the company have increased 85.2% in the past year.

The Zacks Consensus Estimate for Century Casinos’ 2022 sales and EPS suggests growth of 16.9% and 44.7%, respectively, from the year-ago period’s levels.