Vertimass’ technology helps producing sustainable transportation fuels and chemicals that reduce greenhouse gas (GHG) emissions. Production facilities will be developed per the agreement and nearly 50% of the total production capacity from the facilities can be renewable-propane to support UGI’s sustainable goals. This technology is low-cost and will assist in reducing UGI’s global carbon footprint, and boost SAF production.

In September 2021, the joint venture (JV) of UGI Energy Services, LLC, a subsidiary of UGI, and Global Common Energy, LLC called Cayuga RNG Holdings, LLC inked a deal to develop its second renewable natural gas (RNG) project in upstate New York. Per the agreement, the endeavor will include construction of an anaerobic digester and a combined heat and power project.

UGI’s buyout of GHI Energy, LLC, a renewable natural gas company operating in California, is helping it expand its renewable product offerings and support its aim of growing in an environmentally-friendly way.

UGI also disposed its 5.97% ownership interest in the Conemaugh coal-fired generating station in fiscal 2020 to reduce the total Scope I direct emissions by more than 30%. In May 2021, UGI announced plans to reduce Scope I GHG emissions by 55% within 2025.

Transition in the Industry

One of the biggest challenges today is climate change due to the rising emission of GHG. With increasing awareness of trimming toxic emissions globally, companies are adopting clean-energy sources to provide environmentally-friendly energy to its end users. Even the current US regime had announced plans to reach the net-zero emission economy by 2050.

The quest of the utilities to cut down on emission will assist in lowering the release of harmful GHG. ONEOK, Inc. (OKE - Free Report) announces its plans to reduce Scope 1 and Scope 2 GHG emissions by 30% from the 2019 levels of 7.2 million metric tons (MMT). Another utility MDU Resources (MDU - Free Report) retired Lewis & Clark coal facilities in March 2021 and will retire Hesket I & II coal-fired stations in early 2022. Atmos Energy (ATO - Free Report) aims at reducing methane emissions 10-15% in a five years from the current levels. UGI also looks to lower methane emissions 50% within 2035 from the 2017 levels.

Shares of UGI have gained 2.7% in the past three months, underperforming the industry’s rally of 6.1%. 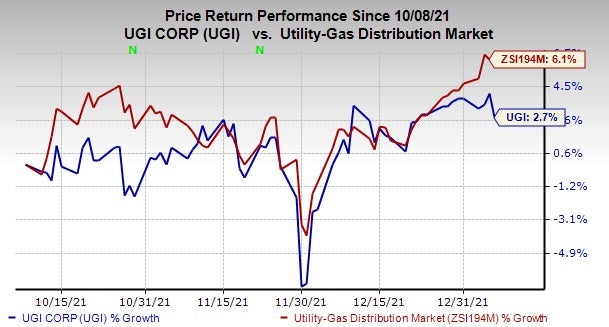