Olin Corporation’s (OLN - Free Report) shares have popped 88.4% over the past year, outperforming the industry’s rise of 5.1%. The company has also topped the S&P 500’s 22.3% rise over the same period.

Let’s dive into the factors behind this Zacks Rank #2 (Buy) stock’s price appreciation. 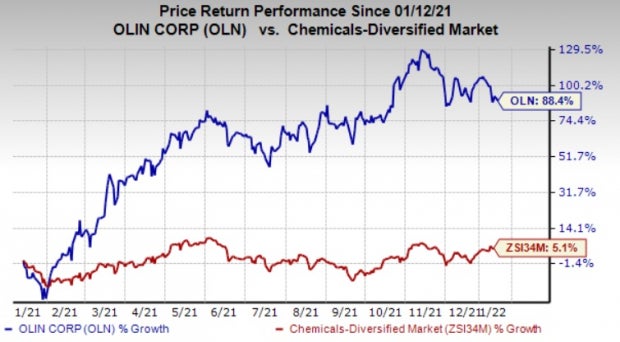 Olin is gaining from the Lake City U.S. Army contract, productivity actions, and investment in the Information Technology (IT) project. Forecast-topping earnings performance in the first three quarters of 2021 and upbeat prospects have also contributed to the rally in the company’s shares.

The company’s Chlor Alkali Products & Vinyls and Epoxy segments are benefiting from higher prices. Its Winchester segment is also poised to benefit from the Lake City U.S. Army ammunition contract. The multi-year contract is expected to significantly boost annual profitability of the unit. Higher commercial and military sales, including ammunition produced at Lake City as well as higher commercial ammunition pricing boosted sales in the Winchester segment in the third quarter of 2021.

Olin is using its cash strategically and remains committed to boosting shareholders' returns. The company, in Nov 2021, announced that its board has approved a new $1 billion share repurchase program. It repurchased around 1.5 million shares of common stock for $68.3 million in the third quarter of 2021.

The company also remains committed to improve its cost structure and efficiency and drive productivity through a number of projects. It currently has more than 1,200 active productivity projects that are expected to contribute to savings. It expects productivity measures to deliver $100 million of net savings for full-year 2021.

Olin is also aiming for an improvement in its net debt to adjusted EBITDA ratio through a combination of improved adjusted EBITDA, disciplined capital spending, and debt reduction. For full-year 2021, it is targeting debt reduction of roughly $1.1 billion by using the cash generated from operations.

The company is also expected to gain from cost and other benefits from its investment in the IT project. The project, which involves implementation of necessary IT infrastructure, is expected to maximize cost effectiveness, efficiency and control over its global chemical operations by standardizing business processes.

Commercial Metals, sporting a Zacks Rank #1 (Strong Buy), has a projected earnings growth rate of 10.5% for the current fiscal year. The Zacks Consensus Estimate for CMC's current fiscal year earnings has been revised 6.6% upward over the past 60 days. You can see the complete list of today’s Zacks #1 Rank stocks here.

Commercial Metals beat the Zacks Consensus Estimate for earnings in three of the last four quarters while missed once. It has a trailing four-quarter earnings surprise of roughly 7.4%, on average. CMC has rallied around 57% in a year.

Albemarle beat the Zacks Consensus Estimate for earnings in each of the trailing four quarters, the average being 22.1%. ALB shares have popped around 24% in a year.

AdvanSix beat the Zacks Consensus Estimate for earnings in each of the trailing four quarters, the average being 46.9%. ASIX has rallied around 98% in a year.