Climate-change concerns have peaked in recent times. This calls for developing EV batteries to de-carbonize the global economy, buoying the demand for metals, particularly copper and nickel, used to produce batteries. An expected surge in demand for nickel is anticipated over the next decade as EVs pick up steam and gain popularity. Nickel enhances the energy storing capacity in a battery's cathode, extending an EV's range.

Tesla’s announcement comes in the light of pro-climate change demands. The company is driven in its vision to expedite the transition to green transportation solutions. Tesla’s CEO, Elon Musk, since 2020, has been harping on the focus to pump up nickel production in an environmentally viable way.

The United States, till now, has not featured well in nickel production. Indonesia is the world's largest nickel producer. However, miners there mostly use energy-intensive technology to extract the metal and engage in controversial waste disposal practices, including dumping waste rock in waterways. Talon's Minnesota project is a joint venture with Rio Tinto. It ensures a key U.S. source of the metal for Tesla battery factories in Texas and Nevada while reducing the company's supply lines at the same time. It is slated to begin by 2026.

Talon plans to use a technology that has the ability to suck carbon dioxide out of the atmosphere and chemically bind. This allows for permanent storage of the gas in rocks found inside Talon’s Tamarack project in northern Minnesota. The process, still under the testing phase, would empower Talon to market carbon-neutral nickel, which will be a big ticket for Tesla in the EV domain.

Tesla plans to buy 75,000 tons of nickel concentrate over the next six years, as well as smaller amounts of cobalt and iron ore, at London Metals Exchange-listed prices. However, it is unclear where Tesla will refine the nickel concentrate as the United States does not have a nickel refinery.

Last year the EV magnet had signed a similar nickel supply deal with BHP Group (BHP - Free Report) in Australia to secure the supply of nickel from the latter’s Nickel West mine.

The alliance required Tesla and BHP Group to join forces to bring about a more efficient battery supply chain. The companies leveraged blockchain technology for raw-material procurement and production and identified supply-chain partners who are best aligned with their vision and battery value chains. BHP and TSLA have also partnered over sustainable solutions concerning energy storage targeting reduced carbon emissions.

Tesla’s commitment toward an EV-defined future and its aim for sustainability naturally make it the undisputed leader of EVs.

Tesla’s shares have risen 30.4% over the past year compared with the industry’s 7.8% growth. 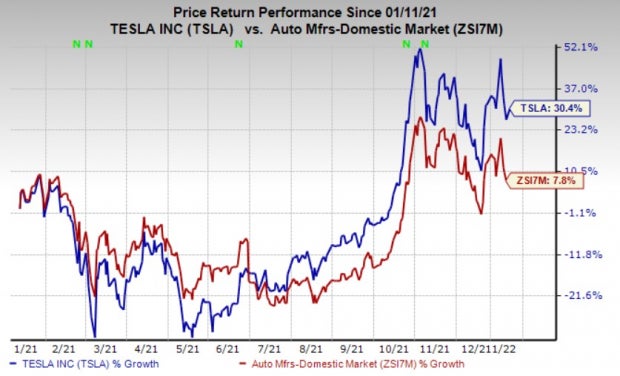 Genuine Parts’ earnings beat the Zacks Consensus Estimate in all the trailing four quarters. GPC pulled off a trailing four-quarter earnings surprise of 16%, on average. Its shares have also gained 31.3% over a year.

Fox Factory’s bottom line beat the Zacks Consensus Estimate in all the trailing four quarters. FOXF delivered a trailing four-quarter earnings surprise of roughly 16%, on average. The stock has rallied 27.9% over a year.

Sonos (SONO) Gets a Favorable Ruling in the Patent Case