Like other global wealth managers, JPMorgan Chase (JPM - Free Report) is seeking to take advantage of the rapidly flourishing business markets in Asia. The Wall Street giant plans to increase its private banking business headcount in the region by more than 100 in 2022. The news was first reported by Reuters, citing people with knowledge of the matter, who asked not to be identified as the matter is private.

Within Asia, JPMorgan will focus more on the China markets, which is among the fastest-growing wealth markets across the globe. Of the total hires, nearly one-fifth will be made in mainland China.

While JPM has not provided an update regarding the number of wealth planners it has in the Asia region, the bank’s assets within its total asset and wealth management business were $3 trillion in third-quarter 2021.

This is not the first time JPMorgan has planned to hire additional staff for its Asia business. In 2021, the bank added 42 employees based in Hong Kong to cover the mainland clients. According to sources, JPM currently has almost 80 workers in its China team.

This time, JPMorgan wants to target employees in China’s new economic sectors like tech, biotech and electric vehicles, per sources.

However, unlike its peers, who have been focusing more on the growing affluent population in Asia, JPMorgan’s private banking segment targets individuals with at least $25 million in investable assets.

Given that Asia (particularly China and India) has been witnessing a surge in the number of billionaires, several firms want to take advantage of this growth.

Last year, Citigroup (C - Free Report) mentioned that it plans to recruit 1,700 people in Hong Kong to gain from the accelerating capital flows between the city and mainland China.

Citigroup’s plans of boosting its Hong Kong operations came close on the heels of other lenders’ moves, who were hiring in the region, in anticipation of a consistent ‘homecoming’ of the United States-listed China firms pursuing secondary listing in Hong Kong. Another reason for Citigroup to announce hires in Hong Kong was to capitalize on serving the mainland’s affluent, following China’s announcement that it opened up its financial markets for foreign firms by removing restrictions on ownership.

Among others, HSBC Holdings (HSBC - Free Report) is already ahead of its hiring targets for the China retail wealth management business. Also, the bank has been contemplating re-entering the private banking business in India.

As part of a group strategy, HSBC exited India’s private banking business in 2015. However, now that the country is experiencing a surge in the number of super-rich, the bank is exploring options of re-entering the market.

Notably, HSBC, which already holds a dominant position in the Asia markets, has been aiming to become the region’s top wealth manager by 2025. Recently, HSBC agreed to acquire L&T Investment Management Limited for $425 million and 100% of the issued share capital of AXA Insurance in Singapore for $575 million.

In February 2021, HSBC announced plans to hire 5,000 wealth planners in Asia over the next five years. Along with this, it announced plans of injecting $3.5 billion worth of capital in the region, of which approximately two-thirds will be used to bolster the bank’s distribution competencies. Further, HSBC plans on shifting capital from the underperforming businesses in Europe and the United States to invest $6 billion in Asia over five years.

In addition to its growth plans in Asia, JPMorgan’s digital retail bank Chase in the U.K. also has plans of hiring more staff in order to be able to provide investment, savings, and a wide range of other banking services and loan products. Last month, Chase announced plans of adding hundreds of staff in 2022, thus taking the total number of staff in the digital-only bank to more than 1,000.

Notably, JPMorgan has constantly been moving toward digitizing operations to better align with customers’ needs. The efforts are expected to support the bank’s profitability and boost market share amid the current low interest rate environment.

Over the past year, shares of JPMorgan have gained 19.3% compared with 30.8% growth recorded by the industry. 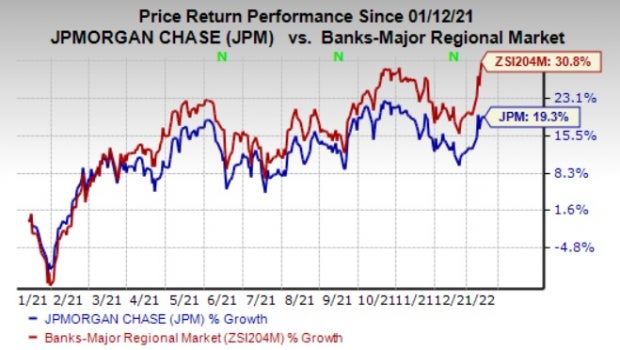