As per the preliminary report, fourth-quarter 2021 revenues are estimated to be $633-$637 million on a reported basis. The Zacks Consensus Estimate of $430 million remains below the preliminary figure.

The company’s COVID-19 revenues for the quarter are expected to be approximately $510 million. Quidel also confirmed selling around 65 million QuickVue COVID-19 antigen tests and more than 4 million Sofia SARS antigen tests during the fourth quarter.

Per the company, the strong revenue uptick in the fourth quarter resulted from a significant surge in demand in multiple markets for its SARS-related products on the back of continued rise in infections due to the spread of the highly contagious Delta and Omicron variants of coronavirus. Quidel also confirmed that it has increased its installed base of Sofia analyzers beyond 76,000 instrument placements, thereby expanding its footprint at the point-of-care testing. This has also led to increasing opportunities in the professional setting to introduce the company’s full portfolio of assays to patients and providers, which drove the quarterly revenues.

Per the company, the full-year total revenues are likely to be $1,695-$1,699 million. The Zacks Consensus Estimate of $1.49 billion remains below the preliminary figure.

Following this release, shares of the company are up 2.7% till the last trading.

Quidel has been observing a robust adoption of its products over the past few months, which has driven up shipments of its SARS tests. The company has been registering strong demand for its QuickVue At-Home OTC COVID-19 test and has been ramping up its production to meet the surge in demand. Quidel has also seen a solid uptick in demand for its QuickVue COVID-19 antigen tests and Sofia SARS antigen tests, which has led to its highest quarterly sales volume for tests in the to-be-reported quarter.

Quidel confirmed that it has opened an immunoassay manufacturing facility in America and has also shipped about 77 million total rapid immunoassay tests in the quarter. This is also likely have driven the company’s top line in the fourth quarter.

Another notable development in the fourth quarter is the company’s announcement of a definitive agreement to acquire Ortho Clinical Diagnostics Holdings plc. The deal, announced in December 2021, is expected to close in the first half of 2022. The same month, Quidel confirmed the efficacy of its antigen tests (QuickVue At-Home OTC COVID-19 Test and Sofia SARS Antigen FIA) concerning continued detection of COVID-19 variants, including Omicron.

The company’s preliminary projection of a robust improvement in revenues on the back of solid testing volumes lifts our confidence on the stock. 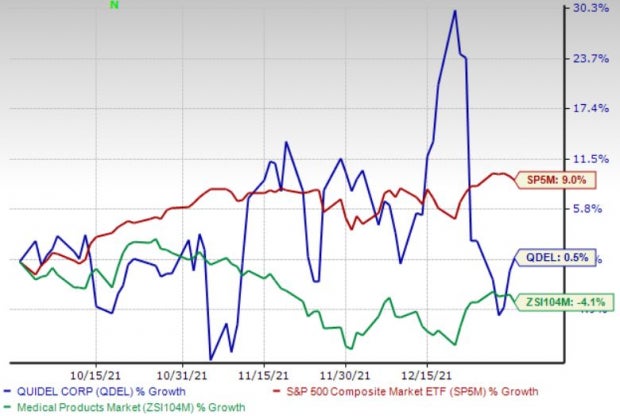 AMN Healthcare has an estimated long-term growth rate of 16.2%. AMN’s earnings surpassed estimates in the trailing four quarters, the average surprise being 19.51%. It currently flaunts a Zacks Rank #1. You can see the complete list of today’s Zacks #1 Rank stocks here.