Horizon Therapeutics plc (HZNP - Free Report) announced that it has submitted a supplemental biologics license application (sBLA) to the FDA for the label expansion of its marketed drug, Krystexxa. The sBLA is seeking approval of Krystexxa plus methotrexate for the treatment of people living with uncontrolled gout.

The regulatory body is expected to complete its review during the second half of 2022.

The sBLA was based on data from the MIRROR randomized clinical study, which evaluated Krystexxa plus methotrexate in patients with uncontrolled gout. In October 2021, Horizon announced positive top-line data from the above study that showed that 71% of patients who received treatment with Krystexxa plus methotrexate achieved a complete serum uric acid (sUA) response, which is defined as sUA<6 mg/dL at least 80% of the time during month six.

Per the press release, the above-mentioned sBLA seeks to update the prescribing information to include Krystexxa plus methotrexate, an immunomodulator often used to improve response rates.

Shares of Horizon have rallied 20.5% in the past year against the industry’s decline of 31.3%. 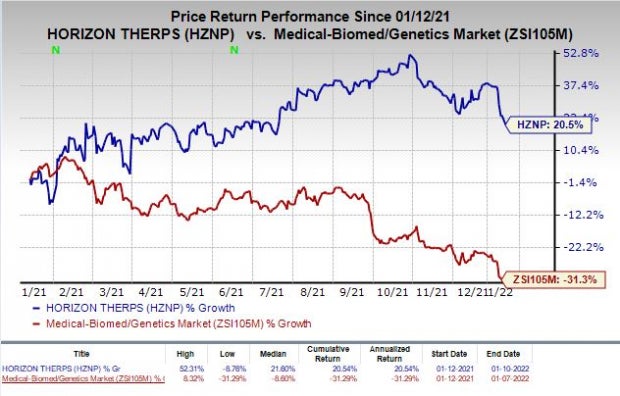 Sales in the Orphan segment are being driven by the strong uptake of Tepezza as well as the continued growth of Krystexxa, Ravicti, Procysbi and Actimmune.

In the first nine months of 2021, Krystexxa generated sales worth $395.2 million, reflecting an increase of 42.7% year over year. A potential label expansion of the drug will make it eligible to serve a broader patient population and boost sales further in the days ahead.

However, competition remains stiff for Horizon in the target market as other companies are developing their candidates for the treatment of gout. Selecta Biosciences, Inc. (SELB - Free Report) is evaluating its pipeline candidate in a late-stage study for the treatment of chronic refractory gout.

Selecta Biosciences has completed enrollment in the phase III DISSOLVE I study, which is evaluating SEL-212 for treating chronic refractory gout. Top-line data from the same is expected in the second half of 2022.

Precision BioSciences’ loss per share estimates have narrowed 20.1% for 2022, over the past 60 days.

Precision BioSciences’ earnings surpassed estimates in each of the trailing four quarters.