Here's Why You Should Retain BD (BDX) Stock in Your Portfolio

Becton, Dickinson and Company (BDX - Free Report) , popularly known as BD, is well poised for growth in the coming quarters, backed by its slew of strategic acquisitions over the past few months. A robust fourth-quarter fiscal 2021 performance, along with a few regulatory approvals, is expected to contribute further. Forex woes and a stiff competitive landscape persist.

The renowned medical technology company has a market capitalization of $73.88 billion. The company projects 7.3% growth for the next five years and expects to maintain its strong performance. BD has delivered an earnings surprise of 16.95% for the past four quarters, on average. 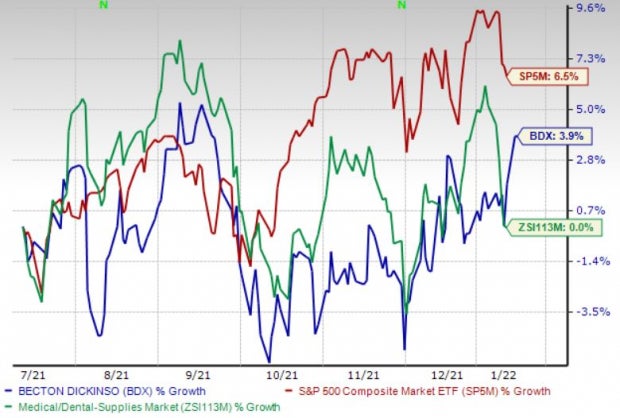 Regulatory Approvals: We are optimistic about BD’s impressive progress on the regulatory front with respect to its products. The company, this month, received the 510(k) clearance from the FDA for the BD Kiestra IdentifA system. The system has been developed to automate the preparation of microbiology bacterial identification testing.

BD, in October, received the FDA’s 510(k) clearance for expanded indications for the Rotarex Atherectomy System.

Strategic Buyouts: We are upbeat about BD’s slew of strategic acquisitions over the past few months. The company, in December 2021, completed the acquisition of privately held Scanwell Health Inc. BD’s management believes that the acquisition will enable the company to expand and scale up its digital capabilities in-house in order to speed up the time to market transformative at-home solutions at present as well as in the future.

Stiff Competition: BD faces significant competition from a wide range of companies. These include large medical device companies with multiple product lines, some of which may have greater financial and marketing resources, as well as firms that are more specialized than BD is with respect to particular markets or product lines. The company faces competition across all of its product lines and in markets where its products are sold.

Foreign Exchange: BD generates a substantial amount of its revenues from international operations and also anticipates that a significant portion of its sales will continue to come from outside the United States in the future. The revenues BD reports with respect to its operations outside the United States may be adversely affected by fluctuations in foreign currency exchange rates. BD cannot predict with any certainty changes in foreign currency exchange rates or the degree to which it can mitigate these risks.

BD is witnessing a positive estimate revision trend for 2022. In the past 90 days, the Zacks Consensus Estimate for its earnings has moved 0.6% north to $12.41.

The Zacks Consensus Estimate for the company’s first-quarter fiscal 2022 revenues is pegged at $4.76 billion, suggesting a 10.4% fall from the year-ago quarter’s reported number.

AMN Healthcare has gained 7.7% against the industry’s 32.1% fall over the past six months.

Catalent has gained 4.2% against the industry’s 17.9% fall over the past six months.