Shake Shack Inc. (SHAK - Free Report) reported robust preliminary sales for the fourth quarter of fiscal 2021. Following the news, SHAK shares surged 13.2%. In the past year, the sock has declined 29.3% compared with the industry’s growth of 9.8%.

During fourth-quarter 2021, average weekly sales increased to $74,000 from $72,000 in the third quarter of 2021. During the quarter, the company also opened its first-ever drive-thru locations in Maple Grove, MN and Lee's Summit, MO.

During the quarter, the company opened 19 net system-wide Shacks, which include 13 net domestic company-operated Shacks and 6 net licensed Shacks. 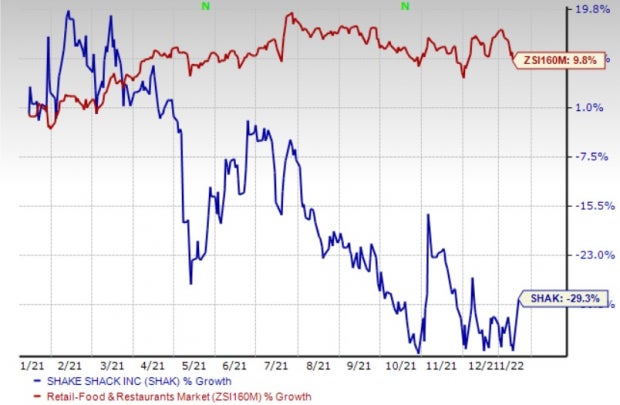 Licensed revenues in fiscal 2021 increased 50.7% year over year to $24.9 million. The company opened 58 net system-wide Shacks in the full fiscal.

Chuy's Holdings currently carries a Zacks Rank #2 (Buy). CHUY reported better-than-expected earnings in each of the trailing four quarters, the average surprise being 52.7%. Shares of CHUY have increased 4.9% in the past month.

The Zacks Consensus Estimate for Chuy's Holdings current financial-year sales and EPS suggests growth of 23.8% and 115.5%, respectively, from the year-ago period’s levels. You can see the complete list of today’s Zacks #1 Rank (Strong Buy) stocks here.

Arcos Dorados carries a Zacks Rank #1. ARCO has long-term earnings growth of 42.9%. Shares of the company have increased 13.2% in the past three months.

The Zacks Consensus Estimate for Arcos Dorados’ current financial-year sales and EPS suggests growth of 31% and 112.5%, respectively, from the year-ago period’s levels.

Domino's carries a Zacks Rank #2. Notably, the company is benefiting from a solid digital ordering system and higher global retail sales. This, along with focus on robust international expansion, bode well. Meanwhile, Domino's continues to witness growth in terms of its carryout and delivery businesses.

The Zacks Consensus Estimate for Domino's current financial-year sales and EPS suggests growth of 7.1% and 13.5%, respectively, from the year-ago period’s levels. DPZ has rallied 28.5% in the past year.