Quite a few regular pipeline and regulatory updates grabbed focus in the biotech sector this week. Importantly, updates on COVID-19 vaccines and treatments continue to be in the spotlight amid the rapidly spreading Omicron variant.

Biogen Down on Medicare Update: Shares of Biogen (BIIB - Free Report) were down after its controversial Alzheimer’s disease (AD) drug Aduhelm faced another setback. The Centers for Medicare & Medicaid Services released a proposed National Coverage Determination (NCD) decision memorandum whereby the drug will be covered for people with Medicare only if they are enrolled in qualifying clinical trials. Per Biogen, the proposed coverage for anti-amyloid therapies denies nearly all Medicare beneficiaries from accessing Aduhelm. The drug's launch has been slow, and this decision might further impact uptake.

Biogen anticipates additional data from EMBARK and ICARE-AD US and plans to begin patient screening for its post-marketing confirmatory study for Aduhelm in May 2022. The confirmatory study aims to enroll more than 1,300 early AD patients and has a primary clinical endpoint at 18 months after treatment initiation. It will also include a long-term extension to collect data for up to 48 months. For the class of anti-amyloid treatments, multiple clinical studies are expected to generate data over the next 12-18 months, and patient registries are also planned.

Molecular Surges on COVID-Study Update:  Molecular Partners (MOLN - Free Report) and partner Novartis reported positive top-line data from a phase II study for ensovibep (MP0420), a DARPin (Designed Ankyrin Repeat Protein) antiviral therapeutic for COVID-19. Shares of Molecular Partners surged in response to the same.  Both the companies announced that Part A of the EMPATHY clinical study, which compared single intravenous doses of ensovibep versus placebo to treat COVID-19, met the primary endpoint of viral load reduction over eight days. The secondary endpoint of hospitalization and/or Emergency Room visits related to COVID-19 or death showed an overall 78% reduction in risk of events across ensovibep arms compared to placebo. Data also showed that no deaths were observed in the ensovibep treatment arms.

Ensovibep was safe and well-tolerated at all doses (75mg, 225mg and 600mg). The lowest dose of 75mg is the planned dose for further development. Ensovibep maintains potent in vitro pan-variant activity against all variants of concern identified so far, including Omicron.  Concurrently, Novartis stated that it will exercise its option to in-license ensovibep from Molecular Partners. Upon completion of in-licensing, Molecular Partners will receive a milestone payment of CHF150 million and is also entitled to a 22% royalty on sales of ensovibep in commercial territories.  Novartis will become responsible for the development, manufacturing, distribution and commercialization activities of ensovibep.

Amgen’s Lung Cancer Drug Approval: Amgen (AMGN - Free Report) announced that the European Commission has granted conditional marketing authorization to Lumykras (sotorasib), a first-in-class KRAS inhibitor, for the treatment of adults with advanced non-small cell lung cancer (NSCLC) with KRAS G12C mutation and who have progressed after at least one prior line of systemic therapy. Amgen will need to conduct a confirmatory study for continued approval of Lumykras in the given indication. An approval was in the cards as the Committee for Medicinal Products for Human Use has recommended approval of the same. The approval was based on pivotal CodeBreaK 100 data, which demonstrated durable responses and a favorable benefit-risk profile.

Amgen and Arrakis Therapeutics also announced a research collaboration focused on the discovery and development of RNA degrader therapeutics against a range of difficult-to-drug targets in multiple therapeutic areas.

Regulatory Update From Allogene: Allogene Therapeutics, Inc. (ALLO - Free Report) announced that the FDA has removed the clinical hold on all of the company’s AlloCAR T clinical trials. In October 2021, the company announced that the FDA had placed a hold on all five of the company’s AlloCAR T clinical trials based on a report of a chromosomal abnormality detected post-AlloCAR T administration in a single patient treated with ALLO-501A in the ALPHA2 study.

The clinical hold was removed as investigations concluded that the chromosomal abnormality was unrelated to TALEN gene editing or Allogene’s manufacturing process and had no clinical significance. The abnormality was not detected in any manufactured AlloCAR T product or in any other patient treated with the same ALLO-501A lot.

Absci Surges on Deal With Pharma Giant: Shares of Absci Corporation (ABSI - Free Report) surged after it announced a deal with Merck.  Per the collaboration, Absci will deploy its Bionic Protein non-standard amino acid technology to produce enzymes tailored to Merck’s biomanufacturing applications. In exchange, it will receive an upfront payment and certain other milestone payments. Merck has the option to nominate up to three targets and enter into a drug discovery collaboration agreement. Absci would then be eligible to receive up to $610 million in upfront fees and milestone payments for all three targets, as well as research funding and tiered royalties on sales.

The Nasdaq Biotechnology Index has lost 2.68% in the past five trading sessions. Among the biotech giants, Incyte has gained 3.66% during the period. Over the past six months, shares of Vertex have soared 14.02%. (See the last biotech stock roundup here: Biotech Stock Roundup: Regulatory Updates From NVAX, BBIO Down on Drug Failure & More) 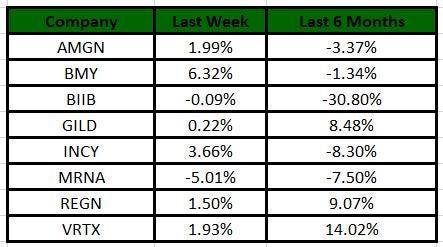