Eni SPA (E - Free Report) announced that it has been awarded five exploration licenses by Egypt’s Ministry of Petroleum and Mineral Resources.

After making significant gas discoveries in the past few years, Egypt held its first oil and gas exploration bid in 2021. At the auction, 24 blocks were offered for sale. The Egyptian Ministry of Petroleum awarded eight natural gas licenses to multiple energy companies, including Eni, to increase the fuel’s exploration and production in the country.

The licenses are in blocks EGY-MED-E5 and EGY-MED-E6 in the Eastern Mediterranean Sea, and the EGY-GOS-13 and EGY-GOS-14 concessions in the Gulf of Suez. The remaining awarded blocks are in the Western Desert. The licenses, in which Eni is the operator at four, cover 8,410 square kilometers.

The licenses are expected to bring more than $250 million, with 33 wells planned to be drilled in major basins across Egypt. The licenses are located in prolific basins, with proven petroleum systems able to generate liquid and gaseous hydrocarbons.

Eni has been contributing to Egypt’s growth since 1954.The company is the country's main producer, with a current equity production of 350,000 barrels of oil equivalent per day. Notably, the bid results fit Eni’s strategy to explore and produce natural gas to serve the domestic market and contribute to LNG export.

The licenses will help Egypt meet its energy sector targets as the country aims to increase the share of natural gas in its energy mix and ensure self-sufficiency in gas.

Shares of Eni have outperformed the industry in the past six months. The stock has gained 29.3% compared with the industry’s 18.4% growth. 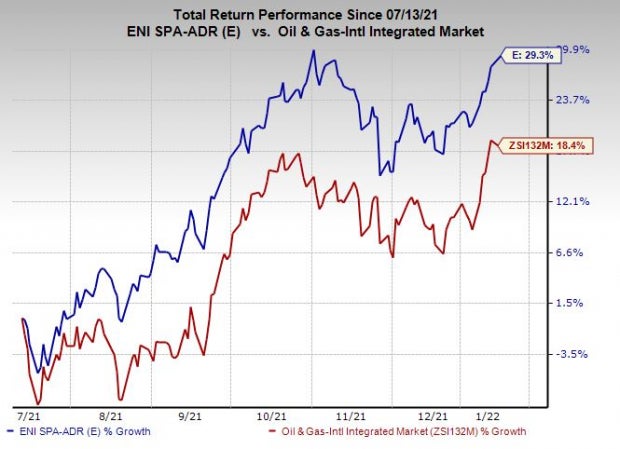 Exxon Mobil Corporation (XOM - Free Report) is one of the leading integrated energy companies in the world. XOM's bellwether status in the energy space, an optimal integrated capital structure and management's track record of CAPEX discipline across the commodity price cycle make it a relatively lower-risk energy sector play. Overall, the company is not focusing aggressively on production to win back investors. Instead, it is making every effort to preserve shareholders’ capital, while lowering costs.

On Oct 27, ExxonMobil announced its fourth-quarter dividend at 88 cents per share, indicating an increase from 87 cents in the previous quarter. Following the increase, the integrated energy giant’s annual dividend for 2021 was $3.49 per share, higher than $3.48 in 2020. Looking at the dividend history, XOM is strongly focused on returning capital to shareholders as the energy firm has hiked its annual dividend payment for more than 39 consecutive years.

Murphy USA is committed to returning excess cash to shareholders through continued share buyback programs. As part of this initiative, the fuel retailer recently approved a repurchase authorization of up to $1 billion, which will commence once the existing $500-million authorization expires and be completed by Dec 31, 2026. The move underscores MUSA’s sound financial position and commitment to rewarding shareholders.

TotalEnergies SE (TTE - Free Report) has one of the best production growth profiles among the oil super majors, characterized by an upstream portfolio, with above-industry-average exposure to the faster-growing hydrocarbon-producing regions of the world. TTE is making regular investments to expand its renewable operation and strives to achieve net-zero emission by 2050.

TotalEnergies currently has a Zacks Style Score of A for Value and B for Growth. TotalEnergies manages long-term debt efficiently and tries to maintain the same at manageable levels. Its debt to capital has been declining in the past few years.