Here's Why You Should Retain Abiomed (ABMD) Stock For Now

Abiomed, Inc. (ABMD - Free Report) is well poised for growth in the coming quarters, backed by strength in its Impella product line. A robust second-quarter fiscal 2022 performance, along with a few regulatory clearances, is expected to contribute further. Stiff competition and pricing pressures persist.

The renowned global provider of medical products designed to assist or replace the pumping function of the failing heart has a market capitalization of $14.52 billion. The company projects 20% growth for the next five years and expects to maintain its strong performance. It has delivered an earnings surprise of 5.84% for the past four quarters, on average. 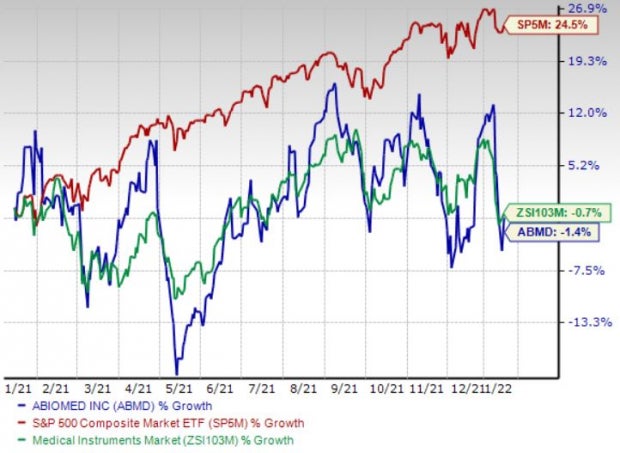 Strength in Impella: Abiomed’s flagship product line, Impella, has continued to be a growth driver, which raises our optimism. Abiomed expanded its Breethe OXY-1 System to seven U.S. sites and has treated 53 patients, thus concluding Phase II of its pilot-site product launch.

Further, the Impella Connect software has come live at more than 85% of the company’s U.S. sites, allowing for most U.S. patients on support to be monitored in the cloud by the field. Management also confirmed during the fiscal 2022 second-quarter earnings call that the Impella 5.0 has been placed in 666 sites, the Impella RP is in 634 sites and the Impella 5.5 with SmartAssist is now available in 306 sites.

Regulatory Clearances: Abiomed has been riding on a suite of regulatory approvals of late, raising our optimism. The company, this month, received the FDA’s Early Feasibility Study Investigational Device Exemption to Impella BTR (Bridge-to-Recovery). In Asia, Impella 5.5 with SmartAssist has received approval from Japan’s Pharmaceuticals and Medical Devices Agency and Hong Kong’s Medical Device Division.

Strong Q2 Results: Abiomed’s solid second-quarter fiscal 2022 earnings buoy optimism. The company saw strength in its global Impella revenues, which is impressive. Abiomed’s receipt of FDA clearances for its Impella products looks encouraging. Abiomed’s June buyout of the remaining interest of preCARDIA also raises our optimism on the stock. The expansion of gross margin bodes well for the stock.

Pricing Pressures: Significant rise in healthcare costs has resulted in numerous initiatives and reforms initiated by legislators, regulators and third-party payers to curb these costs, leading to a consolidation trend in the industry to aggregate purchasing power. With increasing consolidation, competition to provide products and services to industry participants has become and will continue to intensify. This, in turn, has resulted, and will likely continue to result, in greater pricing pressures.

Stiff Competition: Abiomed faces competition from other companies offering circulatory care products. The market where it operates is intense and subject to rapid technological change, besides evolving industry requirements and standards. Abiomed competes with companies that have greater financial, product development, and sales and marketing resources, and experience. The company’s ability to compete effectively depends on distinguishing itself and its products from its competitors and their products.

Abiomed is witnessing a negative estimate revision trend for 2022. In the past 90 days, the Zacks Consensus Estimate for its earnings has moved 3.7% south to $4.21.

The Zacks Consensus Estimate for the company’s third-quarter fiscal 2022 revenues is pegged at $254.5 million, suggesting a 9.9% improvement from the year-ago quarter’s reported number.

AMN Healthcare has gained 50.9% against the industry’s 54.9% decline over the past year.

Catalent has gained 2.7% against the industry’s 25.6% fall over the past year.

Reasons to Add MDU Resources (MDU) Stock to Your Portfolio