Manufactured by Fincantieri in Marghera, Italy, the 3,219-guest capacity ship comprises 107 suites, including an expansive sundeck, an infinity pool as well as an outdoor spa with a glass-walled sauna and a cold room. It also features Ocean Boulevard (including a 44,000-square-foot outdoor walk), an outdoor sculpture garden, an Ocean walk and the Indulge Food Hall. Additional recreational activities, such as freefall drop slides at sea (The Rush and The Drop) as well as a three-level racetrack (Viva Speedway), are also made available.

With respect to this, Harry Sommer, president and the chief executive officer of Norwegian Cruise Line, stated, "Norwegian Viva sets the standard in the premium segment, illustrating our commitment to pushing boundaries in four main areas: wide open space, service that puts guests first, thoughtful design and experiences beyond expectation.”

Going forward, the company remains optimistic about welcoming guests as the ship is scheduled to debut in Mediterranean destinations in June 2023. Scheduled from Jun 15 to Nov 6, 2023, the ship will operate on a series of eight, nine and 10-day voyages from Lisbon, Portugal; Venice (Trieste) and Rome (Civitavecchia), Italy; and Athens (Piraeus), Greece. Also, the company emphasized the 2023-2024 winter season with scheduled sailings from San Juan, Puerto Rico to Southern Caribbean, starting Dec 15, 2023.

Norwegian Cruise is constantly looking to expand its fleet size. It has plans to introduce nine more ships through 2027. Most of them are on order for the Norwegian Cruise Line and the rest are for Oceania Cruises and Regent Seven Seas Cruises. For the Regent brand, it has one Explorer Class Ship to be delivered in 2023. For the Oceania Cruises brand, the company has two Allura Class Ships to be delivered in 2023 and 2025. With project Leonardo, Norwegian Cruise will have additional six ships with expected delivery dates from 2022 through 2027. 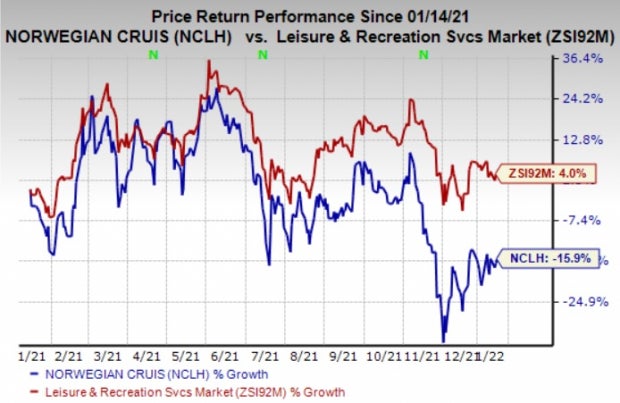 Shares of NCLH have declined 15.9% in the past year against the industry's 4% growth. The dismal performance was mainly due to the COVID-19 crisis. A rise in cases has led to last-minute voyage cancelations. Although the company has announced the restart of cruise voyages, it is unable to evaluate the overall impact of the pandemic on its long-term or short-term business results. Earnings estimates for 2022 have remained unchanged in the past 30 days, limiting the upside potential of the stock.

However, strong demand and growth in booking volumes are likely to aid the company in the upcoming periods. Despite the impact of the Delta variant, the company’s overall cumulative booked position for full-year 2022 is in line with 2019’s record levels. Also, the increased focus on fleet-expansion efforts is enabling the company to gain traction. The company was operating at nearly 40% of its capacity by the end of the third quarter of 2021.

The Zacks Consensus Estimate for HGV’s 2022 sales and earnings per share (EPS) suggests growth of 27.7% and 154.4%, respectively, from the year-ago period’s levels.

The Zacks Consensus Estimate for BVH’s 2022 sales and EPS indicates a rise of 7.6% and 0.4%, respectively, from the year-ago period’s levels.

RCI Hospitality sports a Zacks Rank #1. The company has a trailing four-quarter earnings surprise of 67.7%, on average. Shares of RCI Hospitality have surged 109.7% in the past year.

The Zacks Consensus Estimate for RICK’s 2022 sales and EPS suggests growth of 34.9% and 22.1%, respectively, from the year-ago period’s levels.