Shares of Acadia Pharmaceuticals Inc. (ACAD - Free Report) have rallied 24.2% in the past three months against the industry’s decrease of 13%. 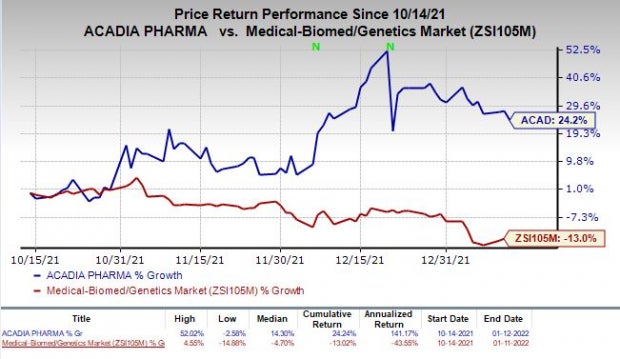 The company has made steady progress with its sole marketed drug, Nuplazid (pimavanserin), approved in the United States for the treatment of hallucinations and delusions associated with Parkinson’s disease psychosis, in this time frame. The drug is the first and the only FDA-approved treatment for the given indication.

Acadia is planning to resubmit the supplemental new drug application (sNDA) for pimavanserin for the treatment of hallucinations and delusions associated with dementia focused on Alzheimer’s disease psychosis (“ADP”) in the first quarter of 2022.

With this resubmission of the sNDA for pimavanserin, Acadia is now narrowing the focus of the proposed indication from dementia-related psychosis to ADP. Shares of the company rose on this news.

The company decided to resubmit the sNDA after the FDA issued a complete response letter (“CRL”) to the sNDA for Nuplazid for the treatment of hallucinations and delusions associated with dementia-related psychosis or DRP in April 2021.

This apart, Acadia has other promising pipeline candidates that are progressing well.

In December 2021, the company announced positive top-line data from the phase III Lavender study that evaluated the safety and efficacy of its pipeline candidate, trofinetide, for the treatment of Rett syndrome. The study met its co-primary endpoints.

Acadia, which expects to file a new drug application (“NDA”) for trofinetide to treat Rett syndrome around mid-2022, is planning to hold a pre-NDA meeting with the FDA in the first quarter of 2022.

Acadia and Stoke will share all costs and profits equally for the SYNGAP1 program across the world.

The collaboration looks like a good strategic fit for Acadia to boost its pipeline of candidates being developed for treating various CNS disorders.

Acadia currently has no approved product in its portfolio other than Nuplazid. Hence, any regulatory setback for the drug will hurt the stock in the days ahead. Nuplazid has witnessed strong uptake since its launch. The company is also developing pimavanserin to treat other neuropsychiatric conditions. A potential label expansion is likely to boost sales of the drug in the days ahead and should drive the stock price.

Axsome Therapeutics has several CNS product candidates, namely, AXS-05, AXS-07, AXS-09, AXS-12 and AXS-14, which are being developed for multiple CNS indications. A prospective approval for any of these candidates will induce competition for Acadia and its products.

Acadia currently carries a Zacks Rank #2 (Buy). A top-ranked stock in the biotech sector is AnaptysBio, Inc. (ANAB - Free Report) , which has a Zacks Rank #1 (Strong Buy) at present. You can see the complete list of today’s Zacks #1 Rank stocks here.

Here's Why Macy's (M) Appears a Solid Investment Bet for 2022