Masimo Corporation (MASI - Free Report) announced preliminary financial results for full-year 2021 on Jan 11. Following this release, shares of the company are down 0.5% till the last trading.

The company is scheduled to release the Q4 and 2021 results on Feb 15 after the closing bell.

As per the preliminary report, full-year product revenues are likely to be $1,235-$1,240 million, up 8-8.4% on a reported basis from comparable figures in 2020. The Zacks Consensus Estimate of $1.23 billion lies below the preliminary figure.

At constant exchange rate (“CER”), full-year product revenues are likely to improve by 7.3-7.7%.

Masimo expects its full-year shipments of non-invasive technology boards and instruments to be around 288,000.

Per the company, the adjusted earnings per share (“EPS”) for 2021 are likely to be $3.88. The Zacks Consensus Estimate of $3.88 is in line with the preliminary figure.

Masimo has initiated its financial outlook for full-year 2022.

The company expects its product revenues for the full year to be $1,350 million, reflecting reported growth of 8.9-9.3%. The Zacks Consensus Estimate of $1.34 billion lies below the company’s projections.

The company expects its adjusted EPS for 2022 to be $4.33. The Zacks Consensus Estimate of $4.33 lies in line with the company’s outlook.

Masimo’s impressive preliminary full-year performance projections raise our optimism. The company had also announced Dual SET Pulse Oximetry for Root — a highly versatile patient monitoring and connectivity hub — in November 2021. The first application of Dual SET Oximetry is a significant advancement to Masimo SET-guided critical congenital heart disease (“CCHD”) screening, with the CE marking and European launch of the Masimo SET MOC-9 module and the addition of the Eve CCHD Newborn Screening Application for Root. Masimo had also announced a slew of favorable studies regarding its products during the fourth quarter as well as throughout the year. These activities raise optimism on the stock.

Shares of the company have lost 10.3% compared with the industry’s 2.4% fall over the past three months. The S&P 500 has gained 5.9% within the same time frame. 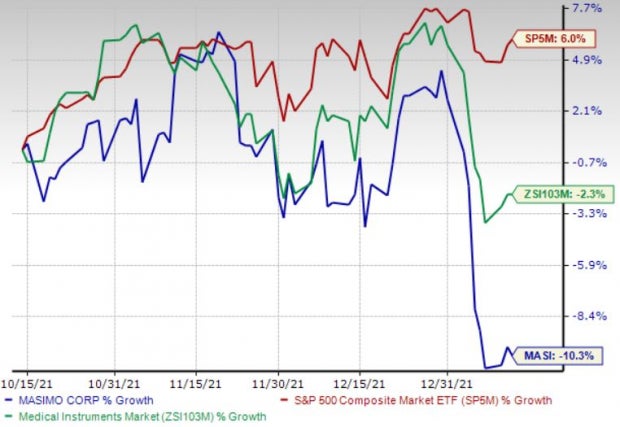 AMN Healthcare has gained 5.1% against the industry’s 19.3% fall over the past three months.

Cerner has gained 28.6% against the industry’s 12.3% fall over the past three months.

Catalent has lost 10.5% compared with the industry’s 9.2% fall over the past three months.