Honda Motor (HMC - Free Report) and LG Energy Solution are contemplating setting up a battery joint venture (JV) in the United States, according to industry sources.

The JV may cost as much as $3.4 billion and is expected to have an annual production capacity of nearly 40 Gigawatt hours (GWh) of batteries, sufficient to power 600,000 electric vehicles (EVs). The companies, however, have not provided any detailed insight on the deal.

LGES, with battery production sites in the United States, China, South Korea, Poland and Indonesia, plans to invest 5.6 trillion won in North America by 2024 to strive for a production capacity of more than 160 GWh by 2025 in the region.

The partnership comes at a crucial juncture when auto giant Honda is gearing up to enter the proliferating U.S. EV market. Last year, the company laid out a plan for a 100% transition to EVs by 2040, becoming the first Japan-based carmaker to aim for full electrification.

Honda’s shares have gained 12.7% over the past year compared with the industry’s 8.2% growth. The company has an expected earnings growth rate of 19% for the current year. 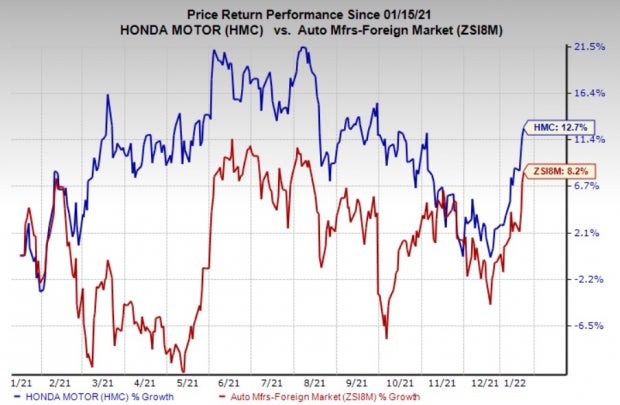 Genuine Parts’ earnings beat the Zacks Consensus Estimate in all the trailing four quarters. GPC pulled off a trailing four-quarter earnings surprise of 16%, on average. Its shares have gained 32.5% over a year.

Ford has an expected earnings growth rate of 2.2% for the current year. The Zacks Consensus Estimate for the current-year earnings has been revised around 2.7% upward over the past 60 days.

Ford’s earnings beat the Zacks Consensus Estimate in all of the trailing four quarters. F pulled off a trailing four-quarter earnings surprise of 335.6%, on average. The stock has also rallied 146% over a year.