AMN Healthcare Services, Inc. (AMN - Free Report) announced preliminary financial results for fourth-quarter 2021 on Jan 10. Following this release, shares of the company are down 0.7% till the last trading.

The company is expected to release the Q4 and 2021 results in February.

As per the preliminary report, fourth-quarter revenues are likely to be $1.35-$1.36 billion. The Zacks Consensus Estimate of $1.22 billion remains below the preliminary figure.

AMN Healthcare’s preliminary revenue projection for the fourth quarter exceeds its earlier-provided expectation of $1,130-$1,150 million, issued in its third-quarter financial results on Nov 4, 2021. Per the company, this revenue surge resulted primarily from strong demand across all revenue segments (led by the Nurse and Allied segment) and around an additional $70 million of labor disruption revenues than included in the earlier-provided guidance.

Per management, the persistent healthcare labor shortages are expected to persist for some time. This highlights the need for short- and long-term workforce solutions, leading to wage inflation. These influences were even more substantial than expected in the fourth quarter of 2021 and are also expected to continue into 2022.

Management expects first-quarter 2022 revenues to be more than $1.1 billion on the back of continued robust demand for all of its talent solutions. The Zacks Consensus Estimate of $1.11 billion is slightly above the company’s projections.

AMN Healthcare’s impressive preliminary fourth-quarter performance projections raise our optimism. Continued strength in the company’s staffing services and a broad array of other services are impressive. Persistent workforce shortages and growing patient volumes have been robustly contributing to AMN Healthcare’s revenues, a trend which is expected to have continued in the to-be-reported quarter. This looks promising for the stock. 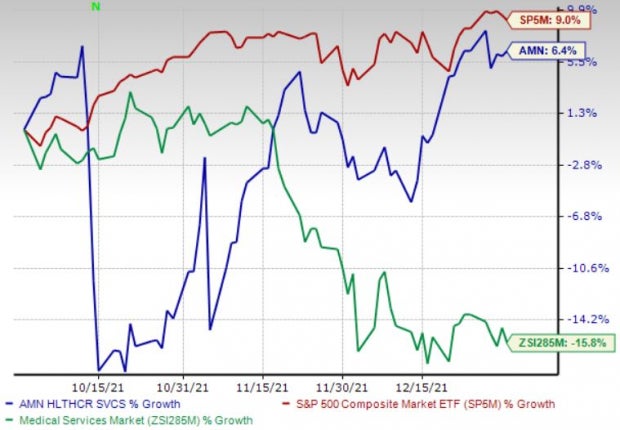 Henry Schein has an estimated long-term growth rate of 11.8%. HSIC’s earnings surpassed estimates in the trailing four quarters, the average surprise being 21.86%. It currently carries a Zacks Rank #2 (Buy). You can see the complete list of today’s Zacks #1 Rank stocks here.

Henry Schein has lost 1.3% against the industry’s 4.5% rise between October and December 2021.

Cerner, carrying a Zacks Rank #2, has an estimated long-term growth rate of 13.3%. CERN’s earnings surpassed estimates in three of the trailing four quarters, the average surprise being 3.21%.

Why is Earnings Beat Less Likely for State Street (STT) in Q4?