Equinor ASA (EQNR - Free Report) reduced its estimate of total recoverable reserves in the Mariner oilfield to 180 million barrels of oil equivalent from its initial consideration of 275 million barrels.

The downward revision led to an impairment charge of $1.8 billion in the area. The Mariner oilfield is situated on the East Shetland Platform of the U.K. North Sea. Equinor operates the field with a 65.1% interest.

The Mariner oilfield, which commenced production in 2019, comprises two reservoirs — Heimdal and Maureen. The field’s reserves have a significant degree of uncertainty due to the high subsurface complexity and its early production phase.

Equinor’s revision of Mariner reserves is associated with an updated seismic interpretation and experience of production from the Maureen reservoir. This has brought forth a revised reservoir model, the outcomes of which are further supported by the results of the first well into the Heimdal reservoir.

When the oilfield came into operation, it was expected to extract more than 300 million barrels of oil over a 30-year period. Mariner is expected to produce 22,000 barrels per day (bpd) in the near term, declining from an average of 30,000 bpd last year.

The Mariner field development involves a production, drilling and quarters platform based on a steel jacket. Crude oil produced from the oilfield is shipped to a floating storage unit, which is then transported to shore through tankers. Notably, the field is expected to produce oil for the next 30 years.

Equinor is ready to collaborate with the Mariner joint venture partners to seek opportunities to improve recovery and production. EQNR intends to continue drilling on the field to increase cash flow in the future.

Shares of EQNR have outperformed the industry in the past six months. The stock has gained 43.7% compared with the industry’s 26.9% growth. 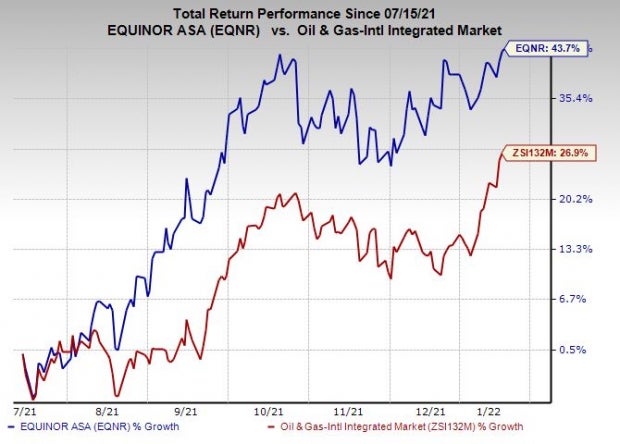 PetroChina currently has a Zacks Style Score of A for both Value and Momentum. In the first six months of 2021, PetroChina's upstream segment posted an operating income of RMB 30.9 billion, nearly tripling from the year-ago profit of RMB 10.4 billion.

Oceaneering International, Inc. (OII - Free Report) is one of the leading suppliers of offshore equipment and technology solutions to the energy industry. OII owns a geographically diversified asset base spread across the United States and the rest of the world. The company's revenue profile is evenly split between its international and domestic operations, lowering Oceaneering’s risk profile.

China Petroleum and Chemical Corporation (SNP - Free Report) , also known as Sinopec, is one of the largest petroleum and petrochemical companies in Asia. SNP is the second-largest crude oil and natural gas producer, and the largest refiner and marketer of refined petroleum products in China.

Sinopec has made major progress in identifying attractive and economically viable oil and natural gas reserves. Notably, Sinopec’s balance sheet strength can boost its financial flexibility. At the end of the first nine months of 2021, the firm had a total long-term loan of only 49,167 million yuan, while cash and cash equivalents were higher at 203,955 million yuan.

Factors to Note Ahead of Procter & Gamble's (PG) Q2 Earnings