The approval in Europe was based on data from three late-stage studies — heiGHt, fliGHt and enliGHten, which evaluated TransCon hGH in more than 300 pediatric patients with GHD.

The approval in Europe was expected, as in November 2021, the European Medicine Agency’s (“EMA”) Committee for Medicinal Products for Human Use (CHMP) rendered a positive opinion on and recommended marketing authorization of TransCon hGH for treating pediatric GHD.

Pediatric GHD, a serious disease that affects orphans, is caused as a result of the pituitary gland’s inability to produce required amounts of growth hormone.

Shares of Ascendis have declined 24.6% in the past year compared with the industry’s decrease of 32.4%. 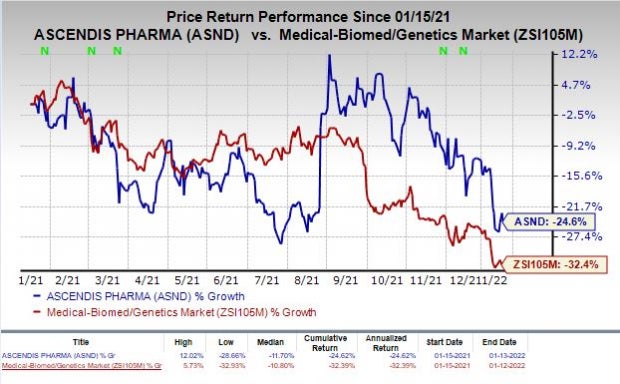 In August 2021, the FDA approved TransCon hGH (under the trade name of Skytrofa) as a treatment for growth failure due to inadequate secretion of endogenous growth hormone in pediatric patients aged one year or above and who weigh at least 11.5 kg. The drug has the potential to replace the current standard-of-care of daily somatropin therapies, including Pfizer’s (PFE - Free Report) Genotropin, due to its once-weekly administration.

Pfizer’s Genotropin generated $284 million in the first nine months of 2021. However, sales of the drug were down 10.1% year over year. A generic version of Pfizer’s GHD drug is also available.

Precision BioSciences’ loss per share estimates have narrowed 6.3% for 2022, over the past 60 days.

Precision BioSciences’ earnings surpassed estimates in each of the trailing four quarters.