The Boeing Company (BA - Free Report) recently reported delivery figures of its commercial and defense operations for the fourth quarter of 2021. This reflects an improvement of 67.8% in commercial shipments from the previous year’s tally as defense shipments improved 38.2% year over year.

Boeing reported commercial deliveries of 99 airplanes in the fourth quarter of 2021, which increased significantly from the prior-year tally of 59, primarily driven by solid 737 deliveries.

However, the aerospace giant delivered none of its 787 Dreamliner jets in the fourth quarter of 2021 compared with the four jets it supplied in the last year’s December quarter.

The 737 Max family of aircraft remains a key catalyst for Boeing’s commercial business ramp-up since its return to operations following the Federal Aviation Administration approval in November 2020. With easier restrictions on domestic and international traveling worldwide amidst the pandemic, the company recorded a surge in demand for its 737 jets.

However, production quality issues relating to 787 Dreamliner remain a concern for the company, resulting in a halt of its shipments. This hinders its overall commercial delivery stats to some extent.

A comparative analysis of Boeing’s arch-rival, Airbus SE’s (EADSY - Free Report) 2021 commercial aircraft delivery numbers with that of the former indicates that this European aerospace giant remained ahead of the U.S. jet maker. Airbus delivered 611 commercial aircraft in 2021 compared with Boeing’s total of 340 in the same year.

However, the year-over-year growth rate for Boeing’s commercial aircraft delivery indicates an improvement of a whopping 117% but for Airbus it implies growth of 8%, indicating that the former is in a better growth trajectory.

Boeing reported defense deliveries of 47 airplanes in the fourth quarter of 2021, which increased significantly from the prior-year tally of 34, primarily driven by AH-64 Apache (remanufactured) deliveries.

Shipments of F-15 Models totaled five compared with only one in the previous year’s fourth quarter, whereas the delivery of the KC-46 Tanker increased by two jets from the previous-year figure to reach a total of six in the fourth quarter of 2021. The delivery of F/A-18 Models remained flat, while shipments of P-8 Models decreased by one jet compared with the units delivered in the year-ago period.

In the last reported quarter, Embraer delivered 30 jets comprising nine commercial and 21 executive (14 light and seven large) jets. The backlog at the end of the third quarter was $16.8 billion for Embraer.

The long-term earnings growth rate for Embraer is pegged at 17%. The Zacks Consensus Estimate for ERJ’s 2022 earnings implies an improvement of 172.2% from the prior-year estimated figure.

Textron delivered 49 jets in the last reported quarter, up from 25 in the year-ago quarter. Textron also delivered 35 commercial turboprops, up from 21 in the third quarter of 2020.

The long-term earnings growth rate for Textron stands at 28.3%. The Zacks Consensus Estimate for TXT’s 2022 earnings has improved 2.2% in the past 90 days.

Shares of Boeing have rallied 10.6% in the past year against the industry’s decline of 26.7%. 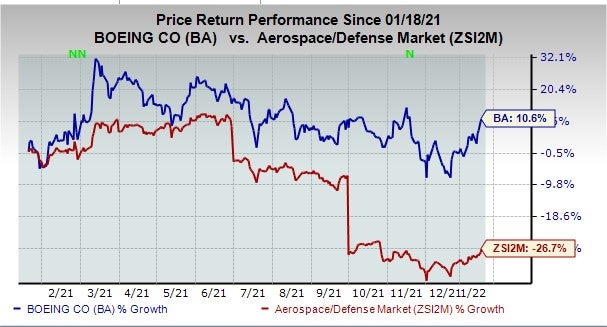