The FCC recently revealed the names of the successful bidders that participated in the mid-band spectrum auction that ended in November 2021. With $9.1 billion worth of bids, AT&T Inc. (T - Free Report) has emerged as the highest bidder in the auction that generated proceeds of about $22.5 billion, followed by DISH Network Corporation (DISH - Free Report) and T-Mobile US, Inc. (TMUS - Free Report) with $7.3 billion and $2.9 billion bids, respectively. The auction was reportedly the third largest of its kind and offered 100 MHz airwaves in the 3.45 GHz band for commercial use across the contiguous United States.

While AT&T acquired 1,624 licenses up for grabs, DISH (bidding under the name Weminuche LLC) and T-Mobile won 1,232 and 199 licenses, respectively. DISH has evolved as one of the leading communications service providers with the acquisition of Sprint’s prepaid wireless business as part of the merger agreement of T-Mobile and Sprint. The company is building its own 5G network to better serve customers and pose significant challenges to rivals. The mid-band spectrum will likely enable DISH to strengthen its position in the market, offering it a more-balanced coverage and network capacity.

Following its merger with Sprint, T-Mobile boasts an unrivaled bouquet of high- and low-band spectrum for a faster nationwide 5G rollout, undeniably disrupting the competitive landscape of the U.S. telecom market. The company is further strengthening its mid-band coverage by adding more towers and spectrum in places with 5G network connectivity. Also, it aims to bring superfast speed to urban areas and rural locations.

AT&T is focusing on core wireless businesses to maintain its leading market position as the industry benefits from a healthy uptick in demand amid the lingering coronavirus scare. While optimizing operations, the company aims to increase efficiencies to lower operating costs and focus on 5G and fiber-based broadband connectivity. Management expects postpaid phone average revenue per user to stabilize in 2022 with higher international roaming calls and an uptrend in premium Unlimited plans.

AT&T is increasingly focusing on its customer-centric business model to attract and retain customers for a lower churn rate. The company aims to profitably increase its postpaid subscriber base leveraging its network quality and market penetration capabilities. As the first carrier in the industry, AT&T has unveiled its 5G policy framework that hinges on three pillars — mobile 5G, fixed wireless and edge computing.

For a seamless transition among Wi-Fi, LTE and 5G services, AT&T intends to deploy a standards-based nationwide mobile 5G network. Its 5G service entails the utilization of millimeter-wave spectrum for deployment in dense pockets, while in suburban and rural areas, it intends to deploy 5G on mid- and low-band spectrum holdings. It believes that as the 5G ecosystem evolves, customers can experience significant enhancements in coverage, speeds and devices. An integrated fiber expansion strategy is expected to improve the broadband connectivity for both enterprise and consumer markets, while steady 5G deployments are likely to boost end-user experience.

Shares of T have lost 6.8% in the past year compared with the industry’s decline of 8.8%. We remain impressed with the inherent growth potential of this Zacks Rank #3 (Hold) stock. 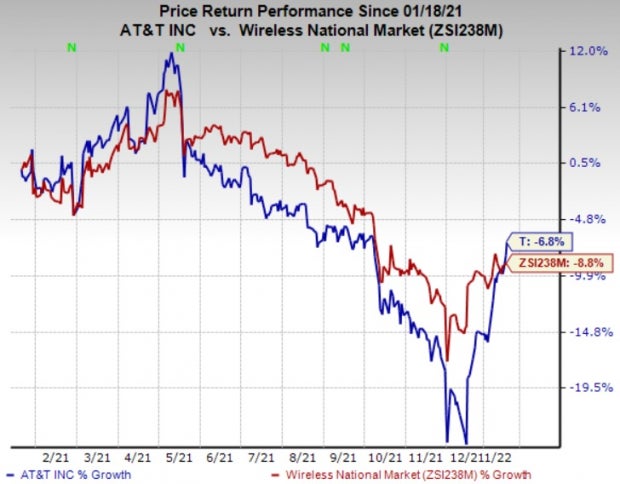 A better-ranked stock in the broader industry is Qualcomm Incorporated (QCOM - Free Report) , carrying a Zacks Rank #2 (Buy). It has a long-term earnings growth expectation of 15.3% and delivered an earnings surprise of 11.2%, on average, in the trailing four quarters. You can see the complete list of today’s Zacks #1 Rank (Strong Buy) stocks here.

Earnings estimates for the current year for the stock have moved up 29.7% over the past year, while that for the next fiscal is up 48.1%. Qualcomm is likely to benefit in the long run from solid 5G traction and a surge in demand for essential products that are the building blocks of digital transformation in the cloud economy.